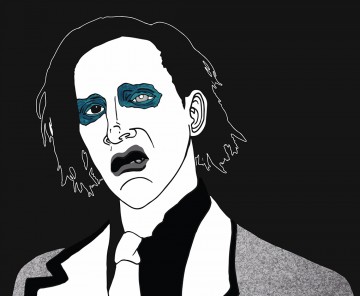 Drawing inspiration from Alice Cooper, Ozzy Osbourne, David Bowie, the occult, horror comics, and (by his own account) the King James Bible, Marilyn Manson established himself in the Nineties as one of the most vilified figures in rock history. Predictably, the more parental groups, politicians and religious advocates protested his music and stage antics, the more popular he became—not only as a musician, but as a martyr in the war against censorship. Charismatic and outspoken, he defended himself as a result of, rather than a cause of, a corrupt society.

Manson was born and raised Brian Hugh Warner in a middle-class family in Canton, Ohio. He was close to his parents but chafed at the ideologies and rules of his private Christian school. Seduced by rock during lectures about alleged evil messages embedded in the music, he took to rebellion and was expelled. Finishing at a public high school, he moved to South Florida with his family, and formed Marilyn Manson and the Spooky Kids in 1989 after a short stint in rock journalism. Each member of the group—Daisy Berkowitz, Olivia Newton Bundy, Madonna Wayne Gacy, and, soon, Twiggy Ramirez—adopted a stage name patterned after Manson’s, a female icon’s first name crossed with a serial killer’s last.

The band self-produced a series of cassettes and attracted the attention of Nine Inch Nails frontman Trent Reznor, who signed them to Nothing, his Interscope imprint, in 1993. The following year, Reznor produced the group’s industrial-metal debut, Portrait of an American Family, and took the band on tour with NIN. There, Manson wasted little time securing his status as a nightmare to the Christian right, exposing himself and feigning sexual acts onstage with other band members (He was arrested after one show in Florida.) He was made a “reverend” of the Church of Satan by founder Anton LaVey, though Manson would later note that he was as much a practicing Satanist as he was a practicing Christian, since he had also been baptized.

Nonetheless, the controversy—and a radio hit with a hard-rock cover of Eurythmics’ “Sweet Dreams”—pushed the 1995 EP Smells Like Children to Number 31 and (eventually) platinum sales. With Antichrist Superstar (Number Three, 1996), Manson became a star. A brutally aggressive concept album about a nihilistic rock god, it spawned two singles that reached the Mainstream Rock chart—”Beautiful People” (Number 29) and “Tourniquet” (Number 30)—and a stage show in which Manson ripped pages out of a Bible. Fueled by (false) rumors that the shows contained animal sacrifices, bestiality and rape, activist groups across America lobbied to ban the group’s performances. In the midst of the furor, Manson cowrote an autobiography, The Long Road Out of Hell, with rock journalist Neil Strauss, in 1997, the same year as the Remix & Repent EP (Number 102) and his big-screen debut in David Lynch’s Lost Highway.

For Mechanical Animals (Number One, 1998), Manson adopted a new persona, an androgynous, Ziggy Stardust-style glam rocker, Omega. He explained to interviewers that Antichrist Superstar and Mechanical Animals were part of a pseudoautobiographical trilogy, told in reverse order, with Mechanical Animals intended as a satire in which the protagonist’s revolution becomes “sold out.”

The album went platinum like Antichrist Superstar before it—and lead single “The Dope Show” was the first MM single to hit the pop chart (Number 122)¬—but the accompanying tour was derailed when Manson’s music was blamed, along with violent video games, as a negative influence on the two teenage boys responsible for the Columine High School massacre in April 1999. Manson canceled several concert dates in light of the tragedy but vehemently distanced himself from it, decrying the killings as well as allegations that his or anyone else’s music was responsible for the murders. (He appeared in Michael Moore’s 2002 documentary Bowling for Columbine to discuss violence and the media.)

After a live album, The Last Tour on Earth (Number 82, 1999), Mason returned in 2000 with the final part of his trilogy, Holy Wood (In the Shadow of the Valley of Death) (Number 13). Telling the story of the future antichrist superstar’s origins before his corruption, the album ditched the glam-rock sound of Mechanical Animals for a return to heavy, industrialized goth rock.

Twiggy Ramirez left the band soon thereafter due to creative differences, but Manson continued on with The Golden Age of Grotesque (Number One, 2003), which was heavily influenced by Weimar-era Berlin and produced a Grammy-nominated single, “Mobscene.” A best-of, Lest We Forget, followed a year later. By this time, the edge had slightly worn off of Manson’s persona: The Onion satirized the rocker with the headline “Marilyn Manson Now Going Door-to-Door Trying to Shock People.

He’d become more famous for his relationships: a brief engagement to actress Rose McGowan, a short-lived marriage to neo-burlesque queen Dita Von Teese and subsequent canoodling with 19-year-old actress Evan Rachel Wood, who appeared in the video for “Heart-Shaped Glasses (When the Heart Guides the Hand),” the first single from his 2007 album Eat Me, Drink Me (Number Eight). Manson reunited with Twiggy Ramirez for the album’s Rape of the World Tour, citing Led Zeppelin’s 2007 reunion as an inspiration.

Manson, who started producing his own brand of absinthe, has been working on the film Phantasmagoria: The Visions of Lewis Carroll, about the fantastical children’s author, for several years (he is directing and starring in the lead role).

In May, 2009, the band released their seventh studio album, The High End of Low, which debuted at Number Four, but sold just 45,000 copies its first week, a worse debut than any of their previous studio albums. In December, 2009, the band broke with longtime label, Interscope, with Manson suggesting that break would free him from constraints on his creativity.

Daniel is an illustrator/graphic designer based out of Austin Texas. He graduated from Pratt Institute with a Bachelors degree in Illustration and an Associates degree in Graphic Design. Daniel started his career in graphic design in the world of online casinos. Since then he’s worked with various clients from around the United States and Canada including but not limited to NHL, Subway, Paraco Propane, Pitney Bowes, Xerox, Conduent, Nestle Waters, The Spill Magazine, Stamford CT’s DSSD, Beechnut Baby Foods, Elizabeth Arden and much more.
RELATED ARTICLES
daniel adamsmarilyn mansonportraits