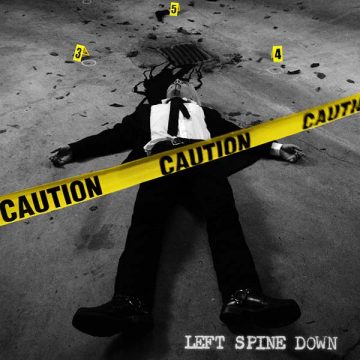 Caution is the latest release, and second full-length album, by Vancouver-based, Left Spine Down. Produced by Dave “Rave” Ogilvie (Skinny Puppy, Marilyn Manson) this album sounds like a mix of another Ogilvie production, Nine Inch Nails, coupled with The Prodigy.

Lyrically, many of the songs are catchy, such as: “You’re the cancer, I’m the cure” of off the track “X-Ray,” while other lyrics are very basic and beg for more depth and substance beyond just making then rhyme. This can be heard on “From Thirty to Zero” where the lyrics ring out, “I long to let go, just when will it all show, I’ll see you down below.”

This album is a good launching pad for the music LSD have recorded so far, but the record feels like it’s not reaching its full potential or taking the songs as far as they could go. Caution is like a little puppy that with a bit more time and growth will be able to break from the leash – with a stronger bark and bite.

The Spill Magazine is a Toronto-based online publication dedicated to covering the independent music scene with a strong focus on our thriving hometown talent. Our writers bring you up-to-date news, in-depth features on musicians and reviews for the latest CD releases. We also travel to the front lines for all local festivals including Canadian Music Week and North by Northeast. Don’t forget to check out our Facebook and Twitter pages for all daily Spill updates.
RELATED ARTICLES
album reviewscautionleft spine down
7.0