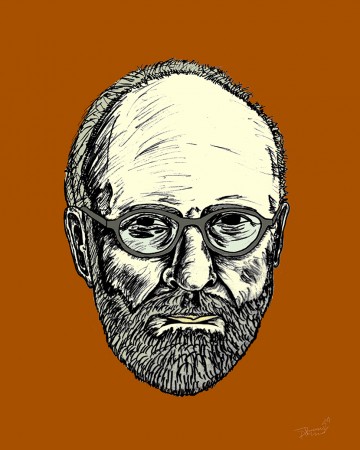 Those familiar with the decades-spanning oeuvre of Bob Mould—from his pioneering early ’80s work with Hüsker Dü to his solo work in singer-songwriter, electronic, and rock modes, to the deafening pop sparkle of Sugar—might expect a new album bearing the title Silver Age to be a somber and reflective set in the mode of his last album, 2009’s Life and Times…and they’d be way off the mark.

Silver Age is an intense and concise ten song blast far more reminiscent of Bob’s latter-day Hüsker Dü output—first marked by the monumental sprawl of 1984’s Zen Arcade which then gave way to the short, sharp pop focus of 1985’s New Day Rising—and his early ’90s tenure with Sugar, whose classic debut Copper Blue marks its 20th anniversary this year. That said, Silver Age is no nostalgia trip. Aside from lyrical content that shows Bob as in-the-now as ever, Silver Age came together quickly and organically in the wake of a series of electric solo dates in 2011 supporting Foo Fighters (where he guested each night on “Dear Rosemary,” the track from the Foos’ Wasting Light on which Bob shares writing and vocal duties) as well as a solo acoustic/book tour around last summer’s publication of See a Little Light: The Trail of Rage and Melody, the autobiography Bob co-authored with Michael Azerrad (Come as You Are, Our Band Could Be Your Life). These events culminated in a tribute last November at Los Angeles’ Disney Hall that featured the likes of Dave Grohl, Ryan Adams, Spoon’s Britt Daniel, and Craig Finn and Tad Kubler of The Hold Steady celebrating the width and breadth of Bob’s body of work.

“I’d been batting around the idea of another aggressive pop record for some time,” Bob says, “especially as the 20th anniversary of Copper Blue kept getting closer. But it was really the shows with Foo Fighters that got me thinking when I started writing for this record: Did I just write a Sugar song? Or a Foo Fighters song? Or one of my own songs? And does it really matter? Once I got that out of the way, it freed me up to have some fun and set about making a simple rock record.”

It’s no surprise, then, that Silver Age careens out of the speakers with a sense of exhilaration that reflects the excitement with which Bob and his live band of bassist Jason Narducy (Spl:t S:ngle, Verbow) and drummer Jon Wurster (Superchunk, the Mountain Goats) cranked out the record in a tight whirlwind of a window from in early 2012. But that’s not to say that Silver Age is a lighthearted romp—as ever, there’s plenty of dark matter at the center of these sweet melodic nuggets. First single “The Descent,” for example, is one of those perfect moments that lands firmly in the Mould wheelhouse, with walls of luminescent guitars, phantom choruses, and infectious hooks all leading toward the concluding refrain of “My world, it is descending.” The opening one-two of “Star Machine” and “Silver Age,” on the other hand, pairs abrasive riffs with equally harsh meditations on fame, immaturity, and the lessons and consequences thereof. Other Silver Age highlights include the bittersweet romantic epic “Round the City Square” (“It feels like people always look to my songs to help define their own failed relationships,” Bob laughs); the upbeat and earnest celebration of “First Time Joy”; and the unabashedly literal “Keep Believing,” a rousing love letter to the records that shaped Bob’s personal and professional life. Listen closely and see how many of the references you can pinpoint:

Bring me thoughts and words, pass me the revolver
I can see for miles, and everything’s in color
Rock and roll all night until I feel the thunder
I got a handle on some complicated fun

We’re all sniffing glue, pleasures so unknown
A circle drawn in blue, the murmur baritone
Picnic on a Pedro lawn, heaven took that monkey song
Never mind the battle won, could you be the loveless one?

“I don’t know if there’s an arc to this record,” Bob says. “But if I had to boil it down to one core idea, it would be: I love music. I love my life. I love what I do for a living. It’s right there on the lyric sheet; it references itself, really. More than any other record I’ve made, this one gives a real glimpse into how much making music means to me as a means of expression, as well as what music means to me as a fan.”

And so has it always been the case for Bob Mould, the music he’s created defining every phase of his life, both cataloging memories and propelling him ever forward: Hüsker Dü’s formation in 1979 and the hardcore anthems, tight, melodic, hard-pop chestnuts, and sprawling double-vinyl conceptual opuses it churned out in equal measure up to its dramatic 1987 flameout; Bob’s solo works ranging from his landmark 1989 debut Workbook to Black Sheets of Rain (1990), Body of Song (2005), District Line (2008), and Life and Times (2009); his forays into electronic music, including 2002’s Modulate and his Blowoff collaboration with Richard Morel; and of course, the soon-to-be-reissued body of work that Sugar packed into its brief existence, featuring the 1992 debut Copper Blue which Bob and his band have been playing front to back at recent live shows. It seems to be Bob’s summations and reflections on these major creative periods of his life and career that open up new wellsprings while coming to terms with the old works—a natural process that has produced winning results yet again in the form of Silver Age.“It’s no coincidence that this record came at this point,” Bob says. “In 1991, closing the door on a run of all-acoustic shows led right into the beginning of Sugar and Copper Blue. So you could state a case that the solo shows accompanying the book readings through 2011—plus the Disney Hall show and knowing the 20th anniversary of Copper Blue was right around the corner—wrapping that all up led me right into Silver Age. I’m well aware that there’s no way to get into a time machine and go back to being the person I was 20 years ago, but it is nice to get three musicians in the studio together and get back inside that three-minute pop song structure again.”

Daniel is an illustrator/graphic designer based out of Austin Texas. He graduated from Pratt Institute with a Bachelors degree in Illustration and an Associates degree in Graphic Design. Daniel started his career in graphic design in the world of online casinos. Since then he’s worked with various clients from around the United States and Canada including but not limited to NHL, Subway, Paraco Propane, Pitney Bowes, Xerox, Conduent, Nestle Waters, The Spill Magazine, Stamford CT’s DSSD, Beechnut Baby Foods, Elizabeth Arden and much more.
RELATED ARTICLES
bob moulddaniel adamsportraits