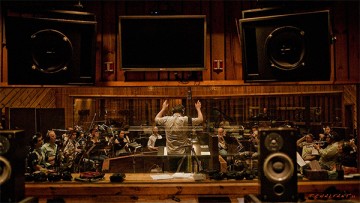 2012 marked the 100th birthday of Toronto-born jazz legend Gil Evans. The composer, arranger, and bandleader is best remembered for his collaborative works with Miles Davis on the classic recordings Miles Ahead, Porgy and Bess, and Sketches of Spain. Apart from a few recordings he made as bandleader (think Out of the Cool from 1960), he has contributed a wealth of musical arrangements that weren’t discovered until recently.

To honour the rich musical legacy Evans left behind, young arranger, conductor, and bandleader Ryan Truesdell formed a big band consisting of top-drawer New York musicians to perform classics and hidden gems from Evans’ catalogue. These arrangements were played in the city of Evans’ birth at Koerner Hall, bringing an enhanced, fuller sound to the classic arrangements.

The night opened with a newly discovered arrangement of the Cole Porter classic “Just One Of Those Things,” which showcased the colorful textures and the spirited swing of the bebop and cool eras of jazz. Another highlight was the Grammy-winning arrangement of “How About You,” which uses Gil’s colourful choices and sense of swing to take the listener to the fun and exciting atmosphere of being in New York.

Other highlights were when Truesdell and his big band took on the classics “Stratusphunk” and “Sister Sadie” from Out of the Cool, and “Time of the Barracudas” from The Individualism of Gil Evans. The feel and groove of these tunes was replicated to the point of bringing the listener back to the actual recording of the tunes, and the solo passages were executed flawlessly and well “in the pocket.”

The vocal numbers, handled by vocalist Wendy Giles, brought the music into a classic era where it was all about the lyrics and true musicianship by all members of the band. The first number, “So Do Can,” highlights the dance band era of Evans when he was arranging for Claude Thornhill. Wendy’s vocals swung and there is a sense of classiness and maturity in her delivery. The maturity carries over to the ballad number “Hang Out the Stars In Indiana,” where the voice brings a sense of romance and the orchestration adds lushness to the performance. For the encore, Wendy’s voice on the bossa nova piece “Look To the Rainbow” brings an angelic touch to the performance, and the orchestral arrangement is very romantic and adds to the poetic quality of the song.

From what was witnessed at Koerner Hall that Saturday evening, Truesdell’s mission of keeping the Gil Evans legacy alive is being fulfilled through his big band, his recordings, and through discoveries of material we haven’t heard before. Thanks to people like Truesdell, jazz fans old and new can appreciate the quality and body of work Gil Evans left behind, and ensure his music lives on for generations to come.

Conrad Gayle is a jazz pianist, composer, and writer. He released three albums, "Genesis EP", "Foundations" and "The Live Sessions 09/10", his first book "The Real Conrad Black", has an active YouTube channel and maintains his own blog site called "The Conrad Gayle Review". He is a graduate from York University with a degree in sociology. He is also active in the city of Toronto as a solo artist and leader of his own trio, as well as being the regular pianist in his home church. He has written for the Spill Magazine for over four years and is planning on continuing the course to become a very successful writer.
RELATED ARTICLES
koerner halllive reviewstoronto

by Conrad Gayle on May 26, 2016
Brad Mehldau – Three Pieces Of Bach @ Koerner Hall, Toronto May 26, 2016 On a beautiful spring Thursday night, I caught a brilliant solo piano concert by one of the premier pianists of our time, Brad Mehldau. This particular solo piano [...]

by Conrad Gayle on November 25, 2015
Oscar Peterson – Music In The Key Of Oscar  The Royal Conservatory Of Music/Koerner Hall | November 25, 2015 2015 has had it’s share of milestone birthdays.  To name a few, Billie Holiday, Billy Strayhorn and Frank Sinatra would be [...]