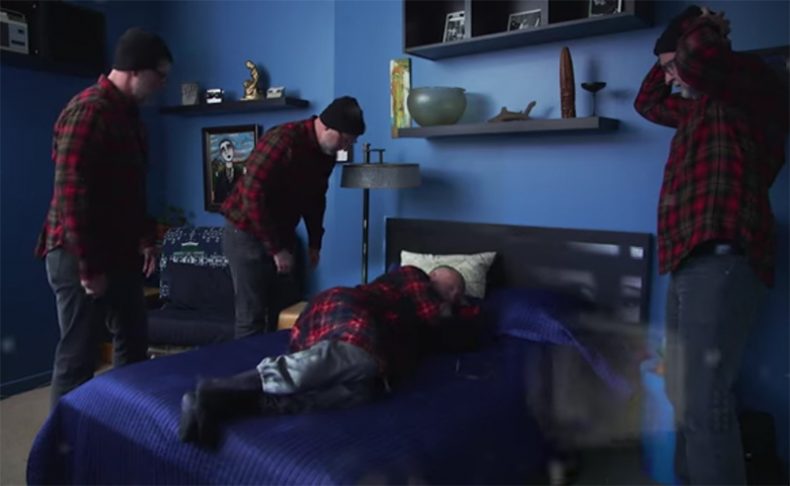 “Hold On,” the latest single from Bob Mould’s critically acclaimed—and recent #1 selling vinyl LP and U.S. Top 100-charting—latest album Patch The Sky (Merge), is also the first track written for the album. Originally conceived by Mould in 2013 as a downtempo acoustic track, the song has since seen a radical transformation into an anthem of hope. Today it is released in all of its glory along with a video interpretation directed by Alicia J. Rose.

Still plagued by the inner spirits that first appeared in the clip for Patch The Sky’s “Voices In My Head,” Part Two of this video series sees Bob’s unmistakable guitar signatures throughout “Hold On” serve as the tools to fend off his demons… while within in an alternate universe playing in a bar for bearded doppelgangers all in plaid, and even a gentleman in white formalwear toasting a life sized rat.

Before Bob Mould and stalwart bandmates Jason Narducy and Jon Wurster hit the road next week and begin their U.S. tour in Madison, WI,  Bob will venture out for a solo electric headlining set at a celebratory concert in honor of the grand opening of Seattle’s own KEXP and their brand new home. “Over the years, KEXP has broadcast live sessions with me from all over the US: studios in NYC, clubs in Portland OR, and festivals such as Bumbershoot and Sasquatch,” says Mould. “I’m thrilled to be part of the grand opening of the new KEXP location.” All live performances will be broadcast on KEXP 90.3 FM Seattle and KEXP.ORG

The band will also be making an April 25th stop at The Late Show With Stephen Colbert before making his way back across the country to play to sold out rooms in Chicago, Los Angeles and San Francisco among others. Later this fall the Bob and the band are scheduled to make their debut appearance at the famed Hollywood Bowl to play KCRW’s World Festival.