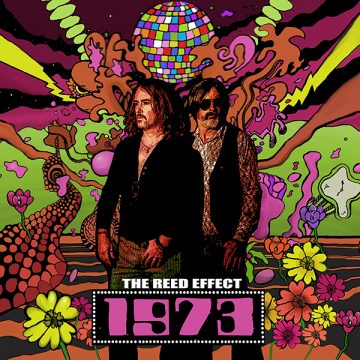 The Reed Effect is an essential band within the Toronto music community. After the unexpected and devastatingly tragic passing of bassist and founding member, Chris Reed, in 2020, his brother, singer and songwriter Kirk Reed, has pushed forward with their long-awaited and highly-anticipated follow-up to 2017’s A Strange Curiosity. Recorded before his passing, 1973 is a strong rock record that flexes songwriting and performance chops, and ultimately makes for a fitting celebration for the life and musicality of Chris.

Opening with lead single “Fine Here”, the album invites the listener to crank up the volume on their sound system with its rhythmic riff and off-centred pulse. Kirk’s vocals truly shine through the throaty and forceful tone of the verse, before he lets out a wild wail in the chorus. Further accented by instrumental runs and a bridge section that comes out of nowhere, “Fine Here” raises the bar and sets the tone for what is to come from 1973. This is furthered with following track, “Rise Up”, a hard-hitting rocker that is driven by an infectious groove reminiscent of a packed dance hall. It’s also worth noting that the guitar tones and lead lines on this track are phenomenal.

The title track is a lyrical and musical throwback to the year of its namesake. Referencing Led Zeppelin, Pink Floyd, The Rolling Stones and more, The Reed Effect paint a convincing picture of sweaty night clubs, vintage cars with the top down, and a reverence for the sounds emanating from the radio on “1973”. Additional highlights on the album come in the shape of the tribal and haunting mantra of “Trampled Under”, and the riff-heavy “Megalomania”.

In many ways, 1973 is a stylistic departure from the dark, alternative driven rock of A Strange Curiosity. In its place is a nostalgic tone that would fit in had it been released in the mid ‘70s. In this case, The Reed Effect live up to the title of the record and successfully shift gears in a manner that does not change the essence of what makes The Reed Effect special. This is no easy feat and yet, the band seemingly does it with ease. Over the course of its seven tracks, 1973 marks a new creative venture for what is to come from The Reed Effect, while also paying tribute to the life and artistry of Chris.

A passion for music has always been a part of Gerrod’s life. As a young boy, he was raised on a steady diet of the music from The Chili Peppers, Aerosmith, The Stones, Prince, and others from his mum. Raised in the GTA, Gerrod continued to foster his love for music by attending a wide range of concerts and learning the drums. His unapologetic passion for music has no bounds and has spread to a wide variety of styles, whether it be the 90’s rock that sound tracked his teenage years, the jazz he studied in university, or his newfound love for hip-hop. He recently received his bachelors in music and education from York University and is passionate about writing and reviewing good (and less than good) music. Gerrod is also the drummer and songwriter for a Toronto based rock & roll band, One In The Chamber.
RELATED ARTICLES
1973album reviewalbum reviews