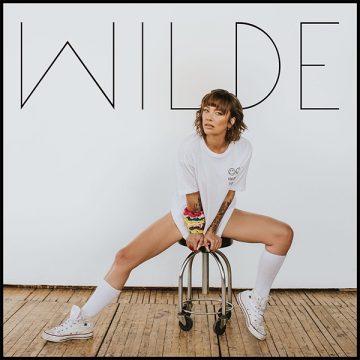 Few artists are turning heads and making a splash in both rock and pop quite like Ontario’s very own JJ Wilde. Coming in hot after 2020’s JUNO nominated album, Ruthless, and two massive singles, “Best Boy” and “Mercy”, Wilde has released her third major release in three years, Wilde. The six-song EP features her two most recent singles alongside four new tracks that find a strong synthesis between rock and pop.

The reverb laden guitars open the EP on “Bushweed” before the song drops into a swaggering strut with Wilde’s rich alto vocals shifting from a rhythmic to a melodic approach at the centre of it all. The chorus builds on the momentum with a half-time feel, allowing for her vocals to soar and truly shine. Taking a left turn, Wilde shifts into an alternative blues track, “Off The Rails”. The song is driven by the twang of a steel string acoustic guitar in the verse before an even catchier chorus. It’s no wonder that “Off The Rails” is the most recent single off the record.

Wilde continues forward without a hitch. While the album seems to only get better as it goes, there really is no short of highlights throughout each song. “Merch” is a stellar power ballad for this decade with an explosive chorus where Wilde lets loose with a throat wrenching belt. The closing track, and initial single, “Best boy” brings the album to a close with an absolute banger that is equally the most pop and the most rock track on the album. Think if St. Vincent fronted Arctic Monkeys or Queens Of The Stone Age and you’d have “Best Boy”. One of the highest peaks Wilde delivers is her cover of Tom Petty and Stevie Nicks’ “Stop Draggin’ My Heart Around”. To do the iconic duet justice, the cover features Brett Emmons of The Glorious Sons and together, Wilde and Emmons will send chills down your spine. Vocals aside, the guitar tones are fantastic, and the song is driven by an energy of reckless abandon, making for a rendition that is both fresh and reminiscent of the original.

If Wilde is any indication, Wilde is only getting better as both a performer and songwriter. Her vocals across the record are stunning while the songs feel developed, refined, and catchy. Rock and pop are intertwined in an alternative wave that is both exciting and captivating. Furthermore, Wilde is both polished and spontaneous, which adds a sense of danger and raw energy to the tracks that is often absent from both genres nowadays. Regardless, Wilde demonstrates a tenacity in tough times and ultimately proves that there is no stopping Wilde.

A passion for music has always been a part of Gerrod’s life. As a young boy, he was raised on a steady diet of the music from The Chili Peppers, Aerosmith, The Stones, Prince, and others from his mum. Raised in the GTA, Gerrod continued to foster his love for music by attending a wide range of concerts and learning the drums. His unapologetic passion for music has no bounds and has spread to a wide variety of styles, whether it be the 90’s rock that sound tracked his teenage years, the jazz he studied in university, or his newfound love for hip-hop. He recently received his bachelors in music and education from York University and is passionate about writing and reviewing good (and less than good) music. Gerrod is also the drummer and songwriter for a Toronto based rock & roll band, One In The Chamber.
RELATED ARTICLES
album reviewalbum reviewsjj wilde