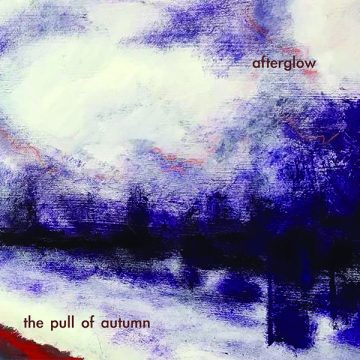 Second albums are difficult. The joke is you have years to complete your first and only one to write and record the second, and many second albums have disappointed. This is not the case with The Pull of Autumn’ Afterglow. Following last year’s self-titled debut, they have come up with an album that is better than their first.

The band is really an artistic collective, assembled by Daniel Darrow (Johanna’s House of Glamour) and  Luke Skyscraper James (Fashion).  It is not a supergroup, but an artistic gathering. As with debut, they have many friends helping them out, but at the core are Darrow and James. They are able to bring many artists from many genres together to produce a very cohesive and beautifully flowing album. There is not a wasted second on this album, and everything falls into place.

The guests are not distracting but rather become part of the band. Listen to Richard Vincent Adams (Hood) on the moving “Haunted By The Rain”. He fits perfectly into the song and it leads perfectly into the next track “Not Coming Down” (which features Darrow’s “Matthew”). James’ vocals fit the song nicely and it is the perfect song to follow “Haunted”. This is how the album plays. Each song, with different vocalists and sometimes different styles lead into each other. It all fits.

Afterglow has a theme running through it, that of surviving and overcoming. Musically it falls into many genres, and although Darrow and James tip their hats to certain bands at times, the sound they create is their own. This is a very original and unique album. This is a band experimenting with sound, melody, lyrics, and presentation and they succeed every step of the way.

I like the fact that the album is bookended by two incredible songs, featuring haunting vocals. “Injure The Swallow” opens and “Wallow” closes. The songs are similar with otherworldly vocals. “Wallow” is much more sparse, and it is the perfect way to close the album.

Afterglow does not fall into one genre. In the past, Afterglow and The Pull Of Autumn would have been called ‘art rock’, a term I have not heard for a long time, but this album fits in that category. It is a work of art.

Born and raised in Whitby, Aaron discovered music through his love of The Beatles. This led to a career in radio, writing for various publications, and ultimately a radio show about The Beatles (Beatles Universe), which ran for over four years. When not immersed in music, Aaron enjoys spending time with the loves of his life -- his wife Andrea, and daughters Emily and Linda (all of whom have an intense love of music too).
RELATED ARTICLES
afterglowalbum reviewalbum reviews

by SPILL NEW MUSIC on September 10, 2020
THE SEA AT MIDNIGHT – “AFTERGLOW” A SPILL EXCLUSIVE MUSIC PREMIERE Drawing from the best postpunk vibe the City of Angels has to offer, we are pleased to premiere [...]

by Aaron Badgley on August 5, 2019
EMBRACING THE LIGHT A CONVERSATION WITH DANIEL DARROW OF THE PULL OF AUTUMN The Pull Of Autumn is a collective of artists, pulled together by [...]
6.0

by Gabrielle Mueller on June 23, 2017
Triptides Afterglow Requiem Pour Un Twister Psychedelic and ethereal, Triptides’ newest album Afterglow proves to be a fantastic addition to this summer’s playlist. With a  beach-pop sound, [...]