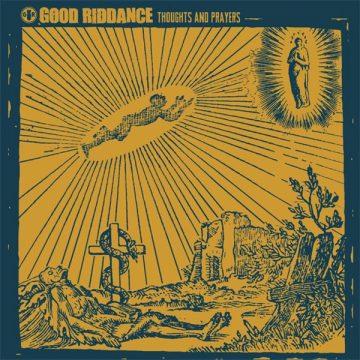 “Now, you’re not naive enough to think we’re living in a democracy, are you, Buddy?”

The sentiment uttered by Gordon Gecko, from the 1987 film Wall Street, could not be more relevant today; it provides a perfect intro into Thoughts and Prayers. In a time of uncertainty south of the border, Good Riddance uses their displeasure toward current events to fuel a poignant punk rock album.

On the first track, “Edward Pettis Bridge”, Rankin sings out,

“Let’s talk about hope/
we need a little sympathy/
I think about my country/
through the lens of history”.

This is a reference to Bloody Sunday, an event that occurred in 1965, when 600 civil rights protesters attempted to cross Edward Pettis Bridge, only to be brutally beaten by police. One can assume that Rankin is relating the discriminatory act of the past, to events taking place today.

The last track on the album, “Requisite Catastrophes”, slows down the tempo in comparison to the rest of the album, but the message stays the same. The song leaves the listener with a message to be aware of the present issues we face as a society. A cue for us to open our eyes to the injustices happening right before us.

Jonathan Del Pozo is a content creator with a passion for music hailing from Oakville, Ont. Del Pozo enjoys a multitude of genres, but admits his angsty teenage years created a bias toward anything heavy. When Del Pozo isn’t attending shows in the Golden Horseshoe, you can catch him in his room devouring coffee and creating content for local bands under his small business moniker, The Scene Remedy.
RELATED ARTICLES
album reviewalbum reviewsfat wreck chords
7.0