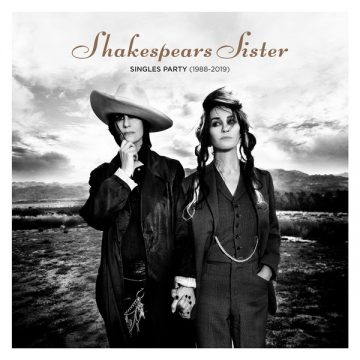 Singles Party is the long awaited return of Shakespears Sister. This is a reunion I never thought I would see.

Marcella Detroit (Marcy Levy) and Siobhan Fahey (Bananarama) formed Shakespears Sister in 1988. They released two albums (both making the top ten in the U.K.) and they had a string of top 40 singles, but by 1992 it was over. Then in 2019 the unthinkable happened, Detroit and Fahey regrouped, toured the U.K., and came up with the new songs to be included in a compilation, the brilliantly titled Singles Party.

All the hits are here, as well as highlights and singles from the albums sans Detroit. But the real prize here are the two new songs.

“All The Queen’s Horses”, was first released as a single to promote the package,a very wise choice. It is a brilliant song, lyrically and musically, and features one of the best videos I have seen in many years. It is easy to read into the lyrics, given the tabloid reports of their split, but just enjoy the song. Fantastic guitar, and some of the finest vocals this year. A great chorus,

is wonderful, and in the end we have a perfect pop single.

The other new single, the cheekily titled  “C U Next Tuesday” (if you don’t get it, I am not explaining), is another brilliant slice of pop rock, and shows us what we have all been missing since 1993. Brilliantly expressed anger, set to some catchy riffs. Just perfect.

Also included is a brilliant and moving acoustic version of “Stay”. Yes, the original  is here too, but this is such a welcome addition. The song brings on new meaning and emotion when heard in this format.

The band has promised an EP of new material in the fall, until then we must be content with this brilliant anthology. The songs are arranged chronologically and there is a deluxe version featuring rare B-sides, rarities, and remixes. The bonus material actually adds a great deal, demonstrating different aspects of Shakespears Sister. Singles Party is not only a great compilation, it is a brilliant album.

Born and raised in Whitby, Aaron discovered music through his love of The Beatles. This led to a career in radio, writing for various publications, and ultimately a radio show about The Beatles (Beatles Universe), which ran for over four years. When not immersed in music, Aaron enjoys spending time with the loves of his life -- his wife Andrea, and daughters Emily and Linda (all of whom have an intense love of music too).
RELATED ARTICLES
album reviewalbum reviewsbananarama
9.0