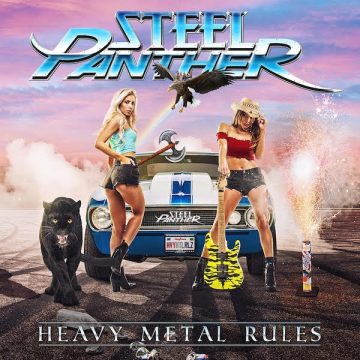 If they hadn’t made it clear already, perhaps the one thing Steel Panther love more than their sex, drugs, and rock ‘n’ roll mantra is heavy metal in the glorious, mega-blockbuster style of the 1980s. The appropriately titled Heavy Metal Rules, the band’s fifth album – their first since 2017’s Lower The Bar – delivers just as you’d expect from the not just the band, but also an album with such a title: 10 tracks of hard-hitting, balls to the wall, in your face rock music set to outrageous and often comedic lyrics.

That being said, there is plenty of great tracks beyond the singles. “Let’s Get High Tonight” feels grittier and heavier than most of the record, while providing an anthem for teenage angst while proving to be the ultimate soundtrack/instructional manual to an out of hand party from any 2000’s film. The oddly emotional ode to rock ‘n’ roll that is the title track also stands as one of the stronger tracks on the album with a song structure that teeters between a power ballad and a rock opera epic, making it one of their more adventurous tracks. The acoustic album closer, “I Ain’t Buying What You’re Selling”, also brings Heavy Metal Rules to a strong, impactful close while also feeling refreshing among the other nine hard rock bangers.

Heavy Metal Rules stands as further proof that it is simply unfair to write Steel Panther off as a parody or comedy band. Lyrics aside, which are many things – corny, cheesy, comedic, outrageous – all of them brilliant, this is a verytalented band performing rock in the style of that from the ‘80s. Their performance far exceeds that of parody into homage as they deliver a series of sweeping solos, crunching riffs, screaming vocals, and power ballads, nearly all proving to be as catchy as some of the actual hits from the decade.While not breaking any new ground (that would defeat the purpose, no?) Steel Panther have delivered a new album that feels oddly nostalgic and without trying to pretend to be anything else, they have captured the true essence of ‘80s rock on Heavy Metal Rules.

A passion for music has always been a part of Gerrod’s life. As a young boy, he was raised on a steady diet of the music from The Chili Peppers, Aerosmith, The Stones, Prince, and others from his mum. Raised in the GTA, Gerrod continued to foster his love for music by attending a wide range of concerts and learning the drums. His unapologetic passion for music has no bounds and has spread to a wide variety of styles, whether it be the 90’s rock that sound tracked his teenage years, the jazz he studied in university, or his newfound love for hip-hop. He recently received his bachelors in music and education from York University and is passionate about writing and reviewing good (and less than good) music. Gerrod is also the drummer and songwriter for a Toronto based rock & roll band, One In The Chamber.
RELATED ARTICLES
album reviewalbum reviewsall i wanna do is fuck (myself tonight)
7.0