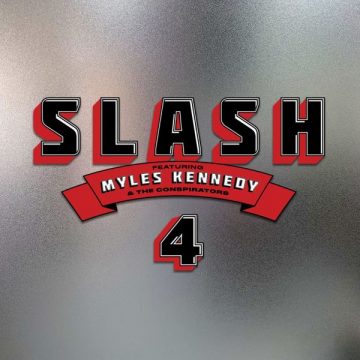 Returning for their fourth record and first studio release since 2018’s Living The Dream, Slash, Myles Kennedy, and The Conspirators set their sights high on 4; ultimately delivering some of their strongest collection of original material in nearly a decade. Recorded entirely live in the studio, 4 sees the hard rock veterans flex their abilities as performers while pushing their songwriting beyond Living The Dream.

Opening with the lead single, “The River Is Rising”, Slash, Kennedy, and The Conspirators are back in full force with a track driven by ripping lead lines and a guitar solo that could only come from Slash. While high in energy, the song does not break new ground and feels like a typical active rock radio single of the last decade. Similarly, the second single, “Fill My World” is another example of straight-ahead rock with little new or special to it. They’re both solid songs but lack the excitement of the band’s first pair of albums, the exception to this, being “Call Off The Dogs”, an explosive track with the raw power to match that of Motörhead and early Guns N’ Roses.

Thankfully, the rest of 4 rises above the singles with some truly revitalized material as the band digs deep into a ’70s rock sound – the Toys In The Attic/Rocks era Aerosmith influence is very apparent – as well as some of their heaviest songs to date. From the psychedelic wash of “Actions Speak Louder Than Words” to the groovy, talk-box driven “C’est La Vie” and the sleazy tone of “April Fool”, Slash’s riffs are simply killer, acting as a needless reminder as to why he is among the most influential guitarists in rock. Additionally, the sludgy “Whatever Gets You By” is an absolute beast of a song, while “Spirit Love” is hauntingly reminiscent of Alice In Chains. A final highlight comes in the form of the sophisticated album closer, “Fall Back To Earth”, a dark and cinematic ballad that pairs Kennedy’s soaring vocals with Slash’s emotionally-driven, yet ripping lead lines together in brilliant fashion. What makes the performance from Slash, Kennedy, and The Conspirators – bassist Todd Kerns, drummer Brent Fitz, and guitarist Frank Sidoris – all the more impressive is the fact that 4 was recorded entirely live. While the band is known for recording their rhythm tracks live, leaving Slash and Kennedy to overdub their solos and vocals, 4 was made in true vintage fashion with all five musicians playing off one another in the same room. The chemistry of this band is undeniable and in full force on 4 with Kennedy and Slash in particular stealing the show for their expected but, none the less, jaw dropping performance.

All in all, 4 lives up to its own long-awaited hype with a truly triumphant return. Slash, Kennedy, and The Conspirators are performing at a latter career peak, one that can hold its own weight next to classic solo albums from Slash, including Apocalyptic Love and World On Fire. Marking a strong return, 4 should leave fans truly excited for what Slash, Kennedy, and The Conspirators have in store on their upcoming tour and beyond.

A passion for music has always been a part of Gerrod’s life. As a young boy, he was raised on a steady diet of the music from The Chili Peppers, Aerosmith, The Stones, Prince, and others from his mum. Raised in the GTA, Gerrod continued to foster his love for music by attending a wide range of concerts and learning the drums. His unapologetic passion for music has no bounds and has spread to a wide variety of styles, whether it be the 90’s rock that sound tracked his teenage years, the jazz he studied in university, or his newfound love for hip-hop. He recently received his bachelors in music and education from York University and is passionate about writing and reviewing good (and less than good) music. Gerrod is also the drummer and songwriter for a Toronto based rock & roll band, One In The Chamber.
RELATED ARTICLES
4album reviewalbum reviews