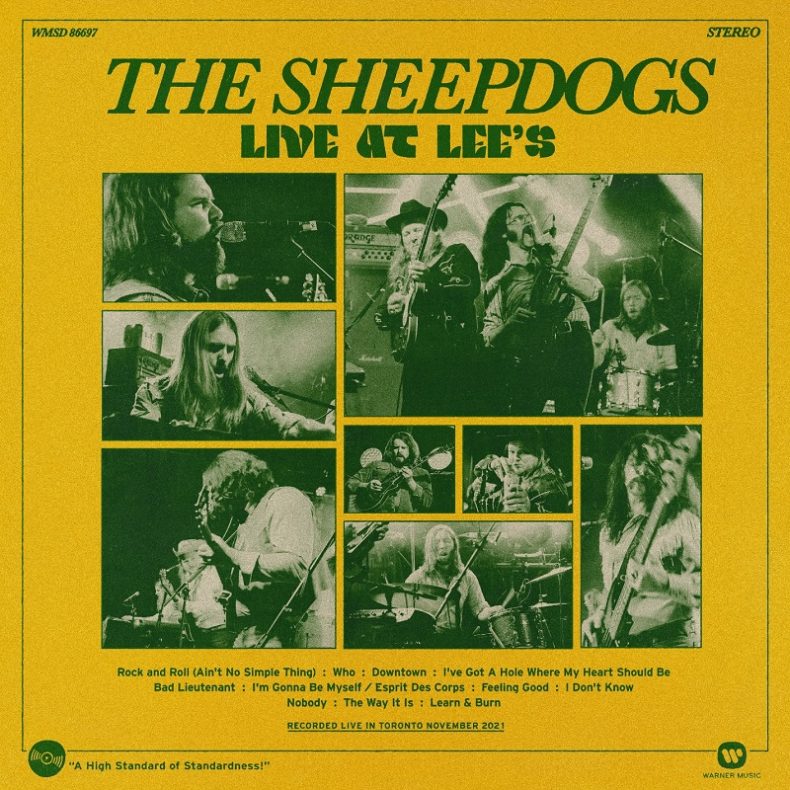 THE SHEEPDOGS BRING THEIR POWERFUL ROCK SHOW TO YOU

Sweaty rock and roll club shows are where The Sheepdogs cut their teeth, and their masterful and larger-than-life live shows are what they are best known for. Their unique ability to breath new life into their celebrated catalogue in raucous rooms around the globe is what has fueled their popularity over the last 10 years. That’s why it seemed fitting that in November 2021, Canada’s good-time rockers would return to one of the venues that helped get them started to do four sold out nights at the famous Lee’s Palace in Toronto.

The energy was thick with anticipation each night, with both the crowd and the band releasing nearly two years of pent-up rock and roll desire into the room. Knowing that these would be special nights, the band set out to capture the energy, and the result is their new album, Live At Lee’s – 11 live tracks re-explored and captured in the moment over this incredible run of performances.

Live At Lee’s features a cavalcade of the band’s gold and platinum-selling hits, fan favourites, as well as new songs like the latest single “Rock and Roll (Ain’t No Simple Thing)” which has spent over 20 weeks in the top 10 at Canadian Rock Radio. Each song of the set builds off the other, aiming to be the antithesis of the live-stream concerts that became the norm over the pandemic. “This is a lot better than watching a show on Zoom,” exclaimed frontman Ewan Currie exuberantly mid-concert after a lengthy jam mid-set to a thunderous reception.

The album sets out to brings the powerful energy of their live show home and transport the listener to Lee’s Palace on those magical nights. To make the experience even more special than a traditional live record the band has taken advantage of new technology and has had the album specifically mastered in Dolby Atmos 3D spatial audio, so fans using supported hardware will hear the show as if they’re in the room. “Listening back was a pretty wild experience. I was able to attend my first Sheepdogs show as an audience member and relive those nights in a whole different way” says bassist Ryan Gullen.

Not stopping at that, the Sheepdogs have more exciting news to announce in the coming weeks, and are set to embark on a tour of the UK and Europe this spring.

SPILL NEWS strives to keep our readers up to date with news and events in the music industry. We keep you informed of the most recent information regarding new releases, tour dates, and information items about your favourite artists.
RELATED ARTICLES
lee's palacenewsthe sheepdogs