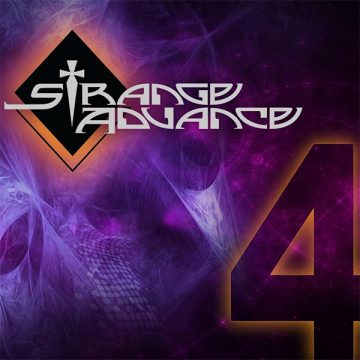 The fourth album from British Columbia-based synth, new wave, rock band Strange Advance is aptly titled 4. It is a veritable time capsule of music. Synonymous with the adage of everything old is new again, 4 is an amalgamation of remixed and remastered vintage unreleased songs along with new material. This combination melds very smoothly, with a late ’80s sound that flows fluently with the sound of Strange Advance’s previous albums, all released in the ’80s with the last being 1988’s The Distance Between.

4 was released on CD and through streaming services, with no plans of a vinyl release, as a fan-club offering in September of 2021.  15 songs, with nary a weak song in the bunch, may arguably be Strange Advance’s strongest release to date.

Sharing lead vocals with Darryl Kromm on the record, Drew Arnott recently spoke to The Spill Magazine. “The record has a very ‘80s sound to it, that’s what comes out of my head. I’m just an old-fashioned guy, and I thought, oh no, this is going to be laughed at. But people were going – No, this is what we like, we’re digging it.”

4 is quite remarkable. Expectations for an album from a band that hasn’t released material for over three decades could be quite low. However, with one listen of 4, one quickly realizes that Strange Advance has shattered any expectations for the album. It is a definite listen for fans of Strange Advance, but remains fresh enough to attract new listeners and gain radio play, along with their best-known and most widely radio spun song “We Run”. Standouts include “Perfect Day”, “In Your Mind”, “Just Like You”, “Turn Away” and “Love Insane”.

Additionally, in support of the album, Strange Advance will tour the first time since the late ’80s, with the following 2022 dates and more to be announced;

John Graham is a Vancouver-area resident who typically spends most days admiring music of all genres. When not listening to music, John is usually at a live show, somewhere in the bowels of Vancouver.
RELATED ARTICLES
4album reviewalbum reviews