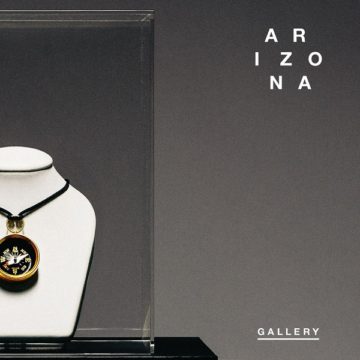 A R I Z O N A
Gallery
Warner Music

Let’s start with a disclaimer: Alternative-pop group A R I Z O N A  actually have no relation to the state. The New Jersey band just like the way the name sounded for their group. The three members were mostly writing songs for other artists, but found themselves in New Jersey together and decided to write and record for themselves. Most new bands release an EP first, but  A R I Z O N A had 12 songs they felt were worth releasing collectively. The result is Gallery, an extremely strong debut with some wonderful lyricism and music,  coupled with some head-scratching choices along the way.  More than anything, the album feels like a two act play. The first act encourages stomping and dancing along the way, while the second follows a similar mantra of sad pop songs at a much slower tempo.

“Annie” sets the stage for what to expect on an  A R I Z O N A song from the get-go: 80s sounding synths, wicked guitar lines, lots of metronome (A R I Z O N A doesn’t have a drummer) and lead singer Nate’s high-pitched vocals leading you on a journey of heartbreak and second chances. The chorus builds into a toe-tapping synth masterpiece, while the second verse stands out as the most brilliant three lines lyrically on the entire album- “But you’re a rebel I’m a bandit/Now we’re ramblin’ the abandoned/Let’s just burn it all down, baby, never look back”, providing rare funny, insightful and awesome imagery in modern pop music.

“Feed the Beast” sounds more like Shaquille O’Neal demanding the basketball in the low post or an extremely large man craving more food rather than a pop song. The verses are great, and Nate singing the word ‘city’ on repeat would make for a sufficient album. But like a few of A R I Z O N A’s songs with potential, it goes unfulfilled with a weak chorus that detracts from how good the keyboard, guitar and synth were to bring you there.

The best one-two punch on the album begins with the “Not a Single Day” interlude, a too short 90 second instrumental combo of slow building piano leading into a gorgeous guitar line that takes over for the last 35 seconds. It’s the perfect build into “Cross My Mind,” A R I Z O N A’s  most popular song with over 25 million plays on Spotify and counting. Simple synths, metronome and vocals carry this song, but you feel Nate’s sadness in perhaps the album’s most universally relatable lyrics: “I know I haven’t been perfect but give it some time/Not a single day goes by where you don’t cross my mind.”

The second act uses “Electric Touch” to bring down the tempo just a bit, but the chorus again feels a bit disappointing compared to the verses. “Brave Enough” channels ’A R I Z O N A’s inner Chris Brown with this pop delight carried once again by the simple guitar line riffing throughout. Down the home stretch, “Are You” feels like a Sting leftover track sprinkled with 2017 production that continues to showcase A R I Z O N A ’s range. A special tip of the cap to Nate for paying homage to his late father by ending the track playing his father’s trumpet, which turns out to be a great way to end it and a touching tribute to one of his musical inspirations.

A R I Z O N A plays to its strengths once again on the final track, giving room for the vocals and guitar to shine through on “Oceans Away”. The beauty and impact this song has is undeniable, but the lyrics definitely leave something to be desired compared to other standouts on the album.

For a first go at a full-length record,  A R I Z O N A have done a tremendous job showcasing their wide range of pop, alternative and even lite rock aspirations. Some songs definitely hit the mark, while a failed chorus or overproduction seem to doom others. However, the undeniable catchiness of a lot of songs make these guys a band to look out for, especially given their cult Spotify following and eventual conquering of suckered, heart-throbbed live audiences all across America.

Josh Stern is a financial analyst living in New York. He recently graduated from the University of Michigan, where he studied User Experience and Data Analysis while writing for various publications. He loves watching sports and attending concerts, and is always on the lookout for the next great Alternative/Indie band.
RELATED ARTICLES
album reviewswarner music
8.0