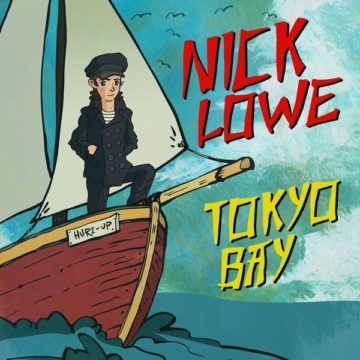 It’s confession time. I have always been a bigger fan of Nick Lowe the rocker than I am of Nick Lowe the elder statesman artist – the main reason being that there was just so much energy and emotion in his earlier music. In many ways, Tokyo Bay/Crying Inside marks a return to form for Nick Lowe. This four-song EP is Lowe’s first release in five years, and its sound hints at his earlier, rockier past.

Nick Lowe has had a storied career, from his 1970s pub rock days in the band Brinsley Schwartz, to producing Britain’s first punk single (“New Rose” by The Damned, in 1976), as well as the first five studio albums by Elvis Costello. As a recording artist, Lowe’s tenure with Rockpile yielded solo albums for himself and co-frontman Dave Edmunds, as well as one official release under that band’s name. Throw in a brief ’80s side-trip in the supergroup Little Village, penning the song “The Beast in Me” for then-father-in-law Johnny Cash, and creating the incredible “(What’s So Funny ‘Bout) Peace, Love and Understanding” (famously recorded by Costello) and one begins to scratch the surface of Nick Lowe’s talent and achievements.

As both a producer and recording artist, Lowe’s stylistic inclinations leaned more towards an early rock ‘n’ roll, and an early-’60s pop sound. By the turn of the century, he had taken to releasing music with quieter arrangements, and with songs more befitting an artist embracing his rock ’n’ roll dotage.

On Tokyo Bay/Crying Inside, Lowe worked with the American instrumental surf rock band, Los Straightjackets, who first appeared on his Quality Holiday Revue Live album. Los Straightjackets help the songs on this EP to shine. The clean simplicity of this band does not get in the way of the singer or the songs. Their primitive, early rock ’n’ roll spirit is perfect for this handful of tunes. Lowe’s work of the past twenty years or so has been decidedly turned-down, but this EP shows that Nick Lowe still rocks, albeit in a mature and subdued way.

The rockabilly-inspired opening track “Tokyo Bay” is sure to bring a smile to fans of the classic Nick Lowe sound. On a song like this, one might get a little nostalgic for the Rockpile guitar tag-team of Dave Edmunds and Billy Bremner, but Los Straightjackets do a serviceable (if understated) job of giving it life. The other original song on this EP, “Crying Inside”, is classic Lowe: the “pretender” trope of a man who puts on a brave face despite internal sadness.

The remaining songs on this release are covers ­– the Barry Gibb-penned “Heartbreaker”, and the old Cliff Richard song “Travellin’ Light”. Both of these songs are presented tastefully by Lowe, in his inimitably charming fashion.

Listening to this EP brings a certain phrase to mind, and that phrase is “More, please!”. On Tokyo Bay/Crying Inside, Nick Lowe and Los Straightjackets give us a glimpse into this artist’s musical past and hopefully, a hint at some great work yet to come.

Bryan Williston has been involved in music since he was a young child. A veteran singer, songwriter, and music educator, Bryan has enjoyed playing a multitude of musical genres in a variety of outfits, over the years. Bryan lives in Whitby, Ontario.
RELATED ARTICLES
album reviewalbum reviewsyep roc records
9.0