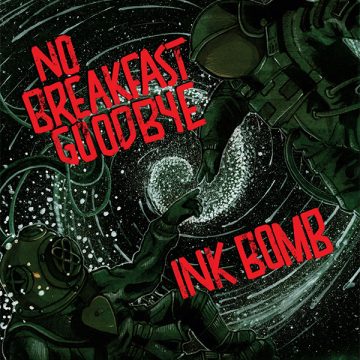 The album opens with a trio of songs from Ink Bomb. “Mutilation Boy” kicks things off into high gear with an onslaught of distorted power chords. The bass-driven and building verse, led by melodic vocals unobstructed by the instrumental denotes a sense of 2000’s post-rock before erupting in the chorus. This continues to develop through the blistering pace of “Dorothy Enters Technicolor” and the pop punk influenced “Turn It Around”. Ink Bomb stand as a unique band that is blending modern post-punk tones and songwriting with a refreshing sense of melody and energy.

The latter half of Split opens with the hazy guitar intro of No Breakfast Goodbye’s “No Dice” before exploding into a relentless pace driven by thrashing drums, raw vocals, and crunching guitars. “The Losers Club” takes a more mid-tempo and rhythmic approach with a strong pop punk tone – particularly in the chorus – to shift the pace from their energetic opener. No Breakfast Goodbye’s half of Split comes to a close with “Fisherman’s Friend”, a track that follows in style of “The Losers Club”.

All in all, Ink Bomb and No Breakfast Goodbye’s split release showcases modern punk rock from The Netherlands with two bands that are using the influence of post-rock and pop punk from the previous two decades to create new and exciting music. The sampler is bound to stir up interest and excitement for both bands largely due to No Breakfast Goodbye’s “No Dice” and Ink Bomb’s “Mutilation Boy”.

A passion for music has always been a part of Gerrod’s life. As a young boy, he was raised on a steady diet of the music from The Chili Peppers, Aerosmith, The Stones, Prince, and others from his mum. Raised in the GTA, Gerrod continued to foster his love for music by attending a wide range of concerts and learning the drums. His unapologetic passion for music has no bounds and has spread to a wide variety of styles, whether it be the 90’s rock that sound tracked his teenage years, the jazz he studied in university, or his newfound love for hip-hop. He recently received his bachelors in music and education from York University and is passionate about writing and reviewing good (and less than good) music. Gerrod is also the drummer and songwriter for a Toronto based rock & roll band, One In The Chamber.
RELATED ARTICLES
album reviewalbum reviews