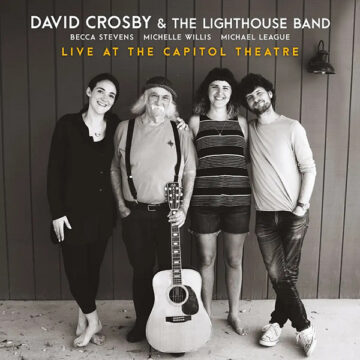 It is hard to believe that Live At The Capitol Theatre is David Crosby’s third solo live album. Why it is hard to believe is because Crosby has been more prolific than in his entire career. Between 1971 and 1993, he released three solo albums. He almost doubled that number by releasing five studio albums between 2014 and 2021. He has toured and been very active. Sure, he has released live albums with Crosby, Stills, Nash and Young (the classic 4 Way Street), Crosby, Stills and Nash, CPR and even Crosby & Nash, but Live At The Capitol Theatre is something a little different. He is accompanied by his band The Lighthouse Band, who have backed him since 2016’s Lighthouse. The band includes Becca Stevens, Michelle Willis, and Michael League. Crosby plays guitar and, of course, sings the songs. And he sounds like he is having the time of his life.

Recorded in 2018 during the tour to promote Here If You Listen, the concert features classic Crosby but also a great deal of material from his solo career over the past 15 years. Songs, such as “Things We Do For Love” from the 2016 album Lighthouse, sound better live than the original studio album. Here the song takes on a warm spirit and beautiful harmonies. The same can be said for “Vagrants Of Venice” from the album Here If You Listen, which they were promoting. The song is written by Stevens, which demonstrates that Crosby was treating this band as a band and not a support. Crosby and Stevens exchange vocals and the result is a wonderful and sparse song that draws the listener into their world. Seeing and hearing it performed live must have been a fantastic experience.

Perhaps the song that may get the most attention is the completion of a long-lost demo titled “1974”. It seems that the song had been sitting unfinished on Crosby’s computer for “40 years.” and was finished for the Here If You Listen Album. Here Crosby and company perform the song with a great deal of passion and, like many songs from that album, it comes off much better live. But it is not the high point of the album. “Laughing” from his first solo album, If I Could Only Remember My Name is powerful and a treat to hear.

As mentioned, the classics are here and Crosby tackles them with the band for full effect. “Guinnevere”, originally from the debut album by Crosby, Stills and Nash, remains very faithful to the original but there are enough differences to keep the listener interested. With Lighthouse, Crosby introduces different vocal arrangements and it is an excellent version. Crosby fans will be interested in his versions of other classics, such as “Woodstock” and “Carry Me”. Crosby’s voice may not be what it was with the originals, but the emotion and passion is there loud and clear.

Live At The Capitol Theatre is a wonderful testament of an artist and a band coming together on the road producing an incredible sound with minimal instrumentation and seemingly little effort. The love of what they are doing comes through and it is wonderful to hear.

Born and raised in Whitby, Aaron discovered music through his love of The Beatles. This led to a career in radio, writing for various publications, and ultimately a radio show about The Beatles (Beatles Universe), which ran for over four years. When not immersed in music, Aaron enjoys spending time with the loves of his life -- his wife Andrea, and daughters Emily and Linda (all of whom have an intense love of music too).
RELATED ARTICLES
album reviewalbum reviewsbmg records
8.0