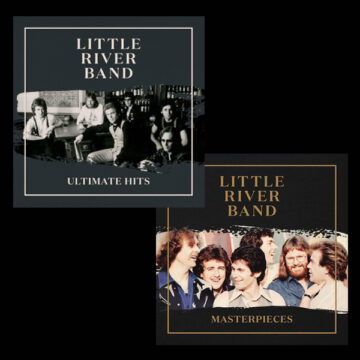 A Little River Band revival is long overdue and therefore it is  perfect timing for these collections to be released. Ultimate Hits and Masterpieces are two separate albums but should be reviewed together. Ultimate Hits is exactly what it says in the title, a collection of all of Little River Band’s hits and their singles, while Masterpieces is a collection of songs from their albums. On Masterpieces, there are no hit singles. Both collections focus on music from their classic albums from 1975 until 1986.  Both collections are organized in a chronological fashion.

These are both excellent compilations and show two very different sides to Little River Band. They had numerous hits (all of which are on Ultimate Hits) and they were also a respected album band. Their albums were being played on FM radio, while their singles dominated the AM radio airwaves. Songs like “Lady”, “Reminiscing”, “Lonesome Loser”, and “Happy Anniversary” demonstrated their ability to write infectious pop songs full of hooks and catchy melodies. These songs were destined to be monster hits and deserved to be so. With incredible harmonies, they were the perfect pop songs.

Little River Band used singles to tackle serious issues not always heard on the radio at the time. Songs  such as “Cool Change” (an environmental song full of compassion and emotion) and  “Home On Monday” (which is a painfully beautiful song about being a professional musician) are two examples and were both huge hits. The Ultimate Hits package reminds us all of just how brilliant this band was and how refreshing their songs sounded at the time and now. These songs have aged extremely well and sound fantastic on this collection.

Masterpieces is an equally brilliant and essential collection. This set does a deep dive into their albums and shows a very different side to the band. The strong melodies, thoughtful lyrics and wonderful harmonies are still there, but with these songs, the band was able to spread their wings somewhat and explore their sound. As with Ultimate Hits, all the songs have been remastered and the sound is stunning. But with Masterpieces one gets to sample their albums and hear some very remarkable songs. Listen to “Hard Life” (Prelude). The musicianship is second to none and then “Hard Life” explodes into its full glory. It borders prog rock and yet it maintains that wonderful Little River band sound.

Of the two packages, perhaps Masterpieces is the more interesting, only because their music on this set has been heard a lot less than their massive hit singles. It isn’t that the songs are better but there is a sense of discovery with Masterpieces. “Blind Eyes”, for example, is a brilliant emotional song full of energy and stunning vocals. While “Another Runaway” shows the band dipping their toes in classical but turning in a convincing rock epic. It is a brilliant song. These are just two songs waiting to be rediscovered or discovered. Masterpieces serves as a wonderful sampler of their first classic albums.

Both of these collections taken together, Ultimate Hits and Masterpieces are near perfect overviews of Little River Band. They serve as an introduction to a band that created creative and wonderful pop and rock. Much like Steely Dan, there is more to this band than just the hits and the time is right for this band to be back in the spotlight. Of course, the ideal is to start with the first album, Little River Band, and listen to everything they did up until 1986’s No Reins (all of which are available through streaming services) but these two sets (triple vinyl and double CD) are a good start.

Born and raised in Whitby, Aaron discovered music through his love of The Beatles. This led to a career in radio, writing for various publications, and ultimately a radio show about The Beatles (Beatles Universe), which ran for over four years. When not immersed in music, Aaron enjoys spending time with the loves of his life -- his wife Andrea, and daughters Emily and Linda (all of whom have an intense love of music too).
RELATED ARTICLES
album reviewalbum reviewseasy money
8.0