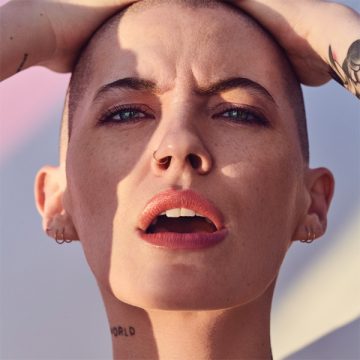 After a rocket-like ascent into worldwide pop stardom fueled by her breakout hit “Rivers,” Bishop Briggs’ debut album, 2018’s Church of Scars, soon climbed into Billboard’s Top 10 Album Chart. Now, she has returned with a new album called Champion, a collection of anthemic, pumping songs that will certainly continue to cement her status as a headlining act worldwide.

One of the first things you’ll notice isn’t even the music itself, but the choice to capitalize every letter of every song title, a move that creates a bold, in-your-face tone visually and which happens to set the mood of the album itself, which is full of mostly bold, in-your-face songs about relationships gone bad and the struggle to move on when they end. Many of the songs here thump around that theme, and the opening track “I Still Love You” is a hooky prologue to the rest of the album in which something of a narrative unfolds, each song seeming to explore the various emotional states that come with life after a break-up.

It’s somewhat unfortunate that the title track “Champion” is one of the more clichéd-sounding songs here, with lyrics like “You gotta fall down before you fight back/Was feeling so weak but baby I’m strong” serving as the chorus. It felt emotionally superficial compared to the rest of the album. “Tattooed On My Heart” is a stand-out here, with a hand-clapping, gospel vibe to it, followed by “Someone Else”, which is a reflective, vulnerable piano ballad in which Briggs slows down, seemingly overwhelmed by it all, singing, “All I want to do is be alone/lose my phone/be someone else.” The album closes with the energetic, pounding tracks that it opened with, but by the end the tone has shifted. The bitterness and injury that tinged the opening tracks and the melancholy reflection on it in the middle finally yields to her thumping out songs of redemption and acceptance by the end.

Overall, this album is a vulnerable, yet fierce collection in which Briggs navigates the trials and tribulations of life and love and sacrifice, and should one be able to relate to the emotional drama here, Briggs’ has provided them with some measure of solace.

Dan Kennard is an English teacher and fiction writer living outside Kansas City, Kansas where he lives with his wife and children. More about his work can be found at amazon.com/author/dankennard. You can also follow him on Twitter and Instagram @kennardistry or contact him at kennardistry@gmail.com.
RELATED ARTICLES
album reviewalbum reviewsbishop briggs
8.0