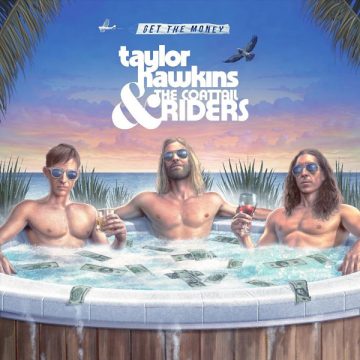 Taylor Hawkins & The Coattail Riders
Get The Money
RCA Records

For their third record – and their first is nearly a decade – Taylor Hawkins, yes, of the Foo Fighters, has reunited his solo band, The Coattail Riders. Get The Money sees not only a return to form from the modern rock outfit, but also features a truly exciting lineup of guest artists, including Roger Taylor (Queen), Duff McKagen (Guns N’ Roses), Perry Farrell (Jane’s Addiction), and Pat Smear and Dave Grohl – yes, the other guys from Foo Fighters – and many more.

Opening with the synth-induced hard rock of “Crossed The Line”, Get The Money sets the tone on a strong note. Featuring Grohl and Yes’ Jon Davidson, “Crossed The Line” not only hits hard, but is just quirky enough to flex some of Hawkins’ experimental songwriting chops – not to mention, that the “Best Of You” Easter egg is bound to put a smile on the face of any Foo’s fan. The album continues with the tasteful, ‘80s inspired ballad, “Don’t Look At Me That Way” which is driven by an incredible vocal duet between Heart’s Nancy Wilson and Hawkins. These two tracks excellently embody Hawkins as a songwriter and recording artist outside of the Foo Fighters; there is a balance between traditional, classic rock, and a deep alternative influence that makes Get The Money shine.

Over the course of its ten tracks, Hawkins leaves no room for any filler material on Get The Money, an album that seems overflowing with killer work and collaborations. In particular, “I Really Blew It”, featuring Grohl and Farrell, stands an alternative rock odyssey that is equally that of the ‘90s and today while “Queen Of The Clowns”, featuring Mark King of Level 42, sees Hawkins indulge in a Bowie inspired swagger. That being said, it is the title track that is perhaps the strongest on the record. “Get The Money” is a daring and stunning composition that features the work of McKagan, Joe Walsh, and Chrissie Hynde.

Front to back, Get The Money is an exceptional record from Taylor Hawkins & The Coattail Riders, a band that, undeservedly so, simply do not get enough credit. If this record does anything, it should legitimize them as far greater than a side project from a Foo Fighter. Between the tight performances, the star-studded guest artists, and the dangerous, risk-taking songwriting style, Get The Money should be considered among the most exciting rock releases of the year.