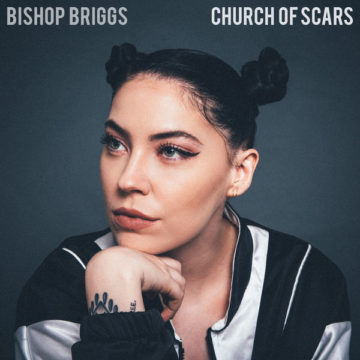 An album three years in the making, Church of Scars is the official full-length debut of Scottish-born, Los Angeles-based singer Bishop Briggs, who performs under the name of her hometown in Scotland.  First making waves in 2015 with her single “Wild Horses” and then again in 2016 with “River”, Briggs is most notable for her uber-confident stage presence and her huge voice. Playing SXSW the past two years doesn’t hurt either and it is as much this live environment as it is her physical releases that have resulted in her being touted as an artist to watch out for these past few years.

There is no doubt that every decision made on this album was about how best to showcase Briggs’ huge voice. As a result, the instrumentation is sparse and takes a backseat to vocals; production is also very slick with no distractions beyond that which establishes the song’s very basic sonic framework. The result then is the focus being placed almost solely on vocals, and when you have a voice as powerful and raw as Briggs, that makes perfect sense.  Unfortunately, that also means that we are led all too quickly to realize that her songs are decidedly simple and often repetitive, such that all that’s left is the power of her performance. Not to diminish that, but it all ends up sounding sort of same-ish, radio-friendly, and not nearly as dynamic as it could, given more depth and breadth of instrumentation around it, as well as improved writing, such that the same handful of phrases isn’t repeated in every song.

Though there is a lot to be impressed about in terms of vocal prowess, this album, though long anticipated, leaves a slightly hollow feel of unfulfilled expectations.  More will follow, of that there is no doubt, but on its own Church of Scars was not the debut to hope for.

Br. lives in southern Ontario, grew up on The Beatles and The Journeymen, spent his adolescence immersed in grunge, and his adulthood in British alternative. His greatest joy is seeing his son dance and grow into his own appreciation of the indescribable joy of music...
RELATED ARTICLES
album reviewsbishop briggschurch of scars
7.0