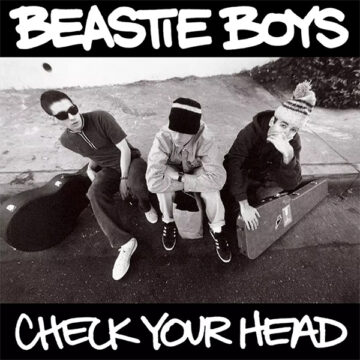 Check Your Head remains an undisputed classic. Opting out of the sample-heavy style the Dust Brothers employed on Paul’s Boutique, the Beastie Boys took a step back to write a record that relied on few samples of other artist’s work. The result was a jam-heavy album that saw the Beatie Boys sample their own instrumental output that blurred the lines between hip-hop, punk, and alternative rock. Through such sonic exploration and creative methodology alone, Check Your Head – with essential tracks including “So What’Cha Want”, “Pass The Mic”, and “Jimmy James” – was in a class of its own. 30 years later and Check Your Head remains a timeless and unparalleled classic that can stand among some of the most unique works of creativity ever.

The second half of Check Your Head (4-LP Deluxe Edition) consists of two LPs worth of live material, remixes, alternate takes, and instrumental versions that were initially released in 2009. While this portion of the reissue is far less essential than the original album – as is often the case with releases like this – there are moments of gold that shine further light onto the creative process surrounding the Check Your Head sessions and the Beastie Boys in the early ‘90s. “Gratitude – Live At Budokan” is an especially raw display of the Beastie Boys’ signature punk rock-infused hip-hop, while the tight bustle of “Stand Together – Live” delivers the full excitement of a Beastie Boys performance. While some of the instrumental tracks – particularly “Dub The Mic – Instrumental” and “Jimmy James – Original Original Version” – showcase the hard funk sound the band with digging deep into, it is the trio of “So What’Cha Want” remixes that shine brightest. All three versions – “Soul Assassin Remix”, “Butt Naked Version”, and “All The Way Live Freestyle Version” – breathe new life into the song, demonstrating a number of different directions present during the creative process.

Check Your Head remains a masterpiece, a true gem among the eclectic and stellar discography of the Beastie Boys. With the addition of the Deluxe Edition, the legacy of this album is only enriched; however, the extent of the material included does not always feel entirely necessary. As is often the case with massive reissues like this, where Check Your Head (4-LP Deluxe Edition) shines is its depiction of the Beastie Boys. Often written off as frat boys to goofy rappers, there is a level of artistry to their work that is often overlooked among the mainstream. Check Your Head (4-LP Deluxe Edition) paints the picture of the Beastie Boys as genuine artists in the pursuit of sonic individualism for its own sake. The resulting collection, without a doubt, is a strong testament to this.

A passion for music has always been a part of Gerrod’s life. As a young boy, he was raised on a steady diet of the music from The Chili Peppers, Aerosmith, The Stones, Prince, and others from his mum. Raised in the GTA, Gerrod continued to foster his love for music by attending a wide range of concerts and learning the drums. His unapologetic passion for music has no bounds and has spread to a wide variety of styles, whether it be the 90’s rock that sound tracked his teenage years, the jazz he studied in university, or his newfound love for hip-hop. He recently received his bachelors in music and education from York University and is passionate about writing and reviewing good (and less than good) music. Gerrod is also the drummer and songwriter for a Toronto based rock & roll band, One In The Chamber.
RELATED ARTICLES
album reviewalbum reviewsbeastie boys
8.0