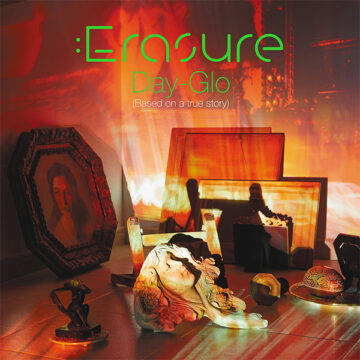 Erasure
Day-Glo (Based On A True Story)
Mute Records

Vince Clarke has been called “the Benjamin Franklin of synth music,” and his role as co-composer, arranger, and sound architect is unequivocal on Erasure’s experimental Day-Glo (Based On A True Story). After manipulating files and vocal samples from their previous album, The Neon, Clarke then sent the new tracks to Andy Bell to record additional vocals. The English electro-pop duo’s 19th album is analogous to Radiohead’s Amnesiac, a successful departure bearing absolutely no resemblance to its sibling.

Day-Glo is Erasure’s ethereal album. The title is apt; every shimmering sound forms vibrant landscapes of bright, saturated hues. The analogue synth reverberations in “Pin-Prick” (a withering double entendre title) and “The Conman” gurgle from the same aquifers as Cocteau Twins’ Blue [Andy] Bell Knoll, where the muse of Bell’s breathy, layered intonations is Enya. The negative space Clarke leaves open in the deceptively simplistic “The End” allows for symphonic introspection and an unexpected Motown “shooby doo-wop.”

The joyous “Bop Beat” and the motorik “Inside Out” incorporate melodic vocal samples into tech house, and the R&B ballad “Now” effectively uses the same trick. “Based On A True Story” could be the theme to a murder mystery in which every anxious element in Clarke’s effects bank is triggered: music box twinkles, synthetic trombone sentinels, and bombastic techno breaks–what a beautiful combination. Unfortunately, like most of the tracks on Day-Glo, so much amassed kinetic energy dissipates prematurely, an irksome weakness hampering the album.

Fans will lament how Bell’s soulful voice recedes more often than it leads on Day-Glo, but there are welcome exceptions. One can hear how The Ronettes and Phil Spector’s work influenced Bell when the stacked harmonies drop in the chorus of  “3 Strikes and You’re Out.” Able to convey loss, acceptance, and empowerment, Bell has inspired many, particularly LGBT people. Singing, “When all is lost, don’t you ever give up hope” in “Harbour of My Heart,” it is a true gift of comfort. An angelic, operatic Bell choir heralds safe arrival into “the icy calm,” Erasure’s creative zenith.

Charles T. Stokes is a nonprofit resource development coordinator and donor researcher based in Denver, USA. He’s also a tennis player and writer looking to make a racket with his own noises. “There are places in the world where one cannot publicly listen to or perform whatever music they choose without fear of harassment or prosecution. The freedom to write about new music is power, a privilege.”
RELATED ARTICLES
album reviewalbum reviewsandy bell
8.0