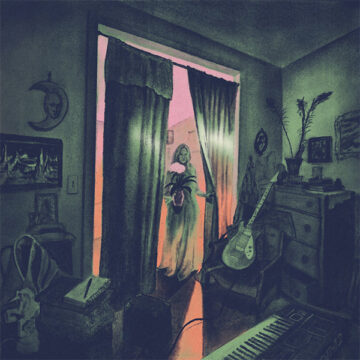 Moonrising is Alice Cohen’s first album since 2019’s Artificial Fairytales. Cohen is known as a musician and fine artist who is never afraid to try new and exciting things or to use music as her own form of therapy. Moonrising is a bit of both. Over the years, as a solo artist and as a member of The Vels and Die Monster Die, Cohen has developed her writing and production skills and in some ways it feels that it has all led to this album. Moonrising is a brilliant album.

Moonrising is a deeply personal album full of Cohen’s experiences over the past few years. Most importantly, was her caring for and losing her father. Add in the pandemic, and Cohen has been coping with a lot. And this is where her music comes in. “Hanging by unraveling threads. Guess I’ll just move along, getting lost in a song”, she sings in “Life In A Bag”, a song about her traveling from New York City, where she is based, to Philadelphia to take care of and be with her dad. It is a moving song, yet the melody and lyrics give it an almost upbeat feel. It is followed by an incredible instrumental “Inner Galaxies”, a minute and a half for the listener to pause, reflect and catch their breath. The combination of lyrics and music packs a punch and such breaks are appreciated.

Musically, the melodies are strong, and stick with the listener. Cohen has assembled an impressive band and the result is a beautifully produced and played album. Her vocals are perfect. She is warm, engaging, and expressive with almost every line. Although the album is about loss, Cohen comes at the topic in a different way. Even the title Moonrising, the opposite to saying ‘sunset’. She looks at the loss of her parents (her mother passed away when she was younger) and looks at the loss of people she loves but also the loss of her youth. She is the elder in the family now. Does this change things for Cohen? That is just one of the questions she asks throughout the album. She sort of answers in the last track, “Fragile Flowers”, one of the best songs on the album.

Moonrising is an important album full of incredibly well-written and performed songs. The highlights are many, and quite frankly it is an album that should be listened to from beginning to end with the lyric sheet out so one does not miss any of her gems in her words. The album opens with “Wild Wolf” (also the first single from the album), but it is not indicative of what is to follow. “Wild Wolf” is a fantastic song, full of strong imagery and it is one of the closest things to goth on the album, but Cohen shifts gears flawlessly and changes the tone of the album instantly.

With Moonrising Cohen has come up with an incredible work of art. The album’s theme carries the listener from beginning to end. It opens up many doors as one tunes into Cohen and some of the doors are a little uncomfortable. Yet Cohen makes it all ok in the end and invites the listener on her journey. It is a wonderful album, and so far has my vote for album of the year.

Born and raised in Whitby, Aaron discovered music through his love of The Beatles. This led to a career in radio, writing for various publications, and ultimately a radio show about The Beatles (Beatles Universe), which ran for over four years. When not immersed in music, Aaron enjoys spending time with the loves of his life -- his wife Andrea, and daughters Emily and Linda (all of whom have an intense love of music too).
RELATED ARTICLES
album reviewalbum reviewsalice cohen
9.0