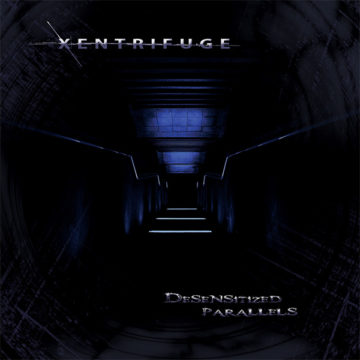 Hailing from the New York underground music scene are Xentrifuge – a duo comprised of Chris X and Lisa Hellen delivering raw industrial/aggrotech sounds to assault the senses with their latest album release Desensitized Parallels. Their music is guttural and brutal, with rhythms and tunes that transports to faraway lands right from the kick off with their first track “Irra”.

The lyrics are highly distorted and otherworldly – either machine or demon, or likely something in between. The rhythms are rapid and pulsating infused with dark synths and crafted chaos. If there was ever a call to stomp out or commune with the powers that be on the dance floor, this album would be that call.

There is something simply mesmeric about Desensitized Parallels that is hard to put into words except to say it is transporting – when not in a space to dance to my soul’s content, listening to this album with headphones on repeat takes my mind to different worlds. If you are a fan of epic gaming soundtracks, Desensitized Parallels is right up your alley.

“Machine Winter” is a personal favourite with its distinctive driving rhythm and unique haunting beat as are “Intravenous” and “Circles of Dust”. Though the lyrics may be hard to make out while listening, reading the lyrics on Xentrifuge’s Bandcamp page reveals a new level of the world Xentrifuge is building within each song. The lyrics to “Encrypted in Visions” are particularly captivating.

“Buried alive in their own minds,
Misery breeds from the inside,
Synergy freed from its confines,
Encrypted in visions, in visions we can’t find.”

Desensitized Parallels is the kind of heavy and intense music that makes a night out at the goth club worth the price of entrance. I’m looking forward to this album being put into regular rotation in the near future. Xentrifuge are currently on tour in the States and I’m excited to see if they have plans for a Toronto show as I’d love to see this album live.

Samantha is both a writer and a fan of the arts and has been able to find numerous ways to pair the two. Eager to dive head first into writing for Spill, Samantha is an avid partaker and reviewer of live art in Toronto serving as an editor at Mooney on Theatre exploring live local theatre, she's a photojournalist for Been Here Done That, a travel, dining and tourism blog that focuses on Toronto and abroad and previously for Lithium Magazine. She's passionate about music, theatre, photography, writing -- not necessarily in that order. She drinks tea more than coffee, prefer ciders over beers, and sings karaoke way too loudly. You can follow her on various social media including Facebook, Twitter, and Instagram.
RELATED ARTICLES
album reviewscleopatra records
7.0