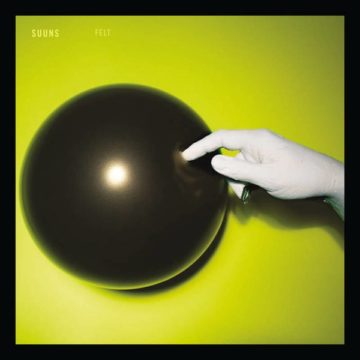 When any artist moves on to their fourth studio album, their direction and stature is often already somewhat set in stone. That’s not the feeling you get when listening to Montreal natives Suuns’ newest release, Felt.

A lot of that comes down to the band’s slightly uneasy, genre bending sound that’s been present throughout their discography, but there’s more to it than that. The album’s winding tracklist pushes the listener through seemingly distant and far-away places without making the listener feel alienated from its sound. Darker, distorted tracks like “After the Fall” and more emotive and optimistic tracks such as ‘Make it Real’ manage to coexist peacefully on the record. It’s hardly what you’d expect from a band that could have easily been pigeonholed in the alternative/electronic boiler room sound.

While the deep textural layers and landscapes in Suuns’ sound belie their experience, their ability to reign in those experimental impulses into clean, crafted songs is where their maturity truly shines through. The saxophone parts on tracks “Peace and Love” and “X-ALT” only work so well because of the absence of that kind of sound from the rest of the record. That being said, the coherency of the album as a continuous listen is one of its weaker points, with seemingly unnecessary tracks (such as “Daydream”) and slightly jarring transitions between songs preventing a truly immersive experience.

At the end of the day, Felt is a testament to sheer talent and potential that Suuns have as musicians. The balance, coherency and range of their sound can’t be overstated. While this is far from a perfect album, it does give the feeling that there’s still a lot more to come from this band. Definitely worth a listen.

Here's what we think...
Spill Rating
Fan Rating
Rate Here
New Criteria
10
10
8.0
Total Spill Rating
10
Total Fan Rating
1 rating
You have rated this
Album Reviews
after the fallalbum reviewsfeltmake it realpeace and lovesecret city recordssuunswatch you watch me
after the fall, album reviews, felt, make it real, peace and love, secret city records, suuns, watch you watch me
About the Author
Andrew Marrocco

Based in Montreal but raised across Western Europe, Andrew feels at home both everywhere and nowhere. Having picked up the piano at age four, he has since gone on to add clarinet, saxophone and guitar to his musical arsenal. As well as crafting music, Andrew spends a lot of time listening both at home and in live contexts. Rather than focusing on a particular style or calibre of artist, he is keen to explore music of any shape or size. Outside music, Andrew's passions lie in philosophical writing, visual art and sharing positivity with the world around him.
RELATED ARTICLES
album reviewspeace and lovesecret city records
8.0