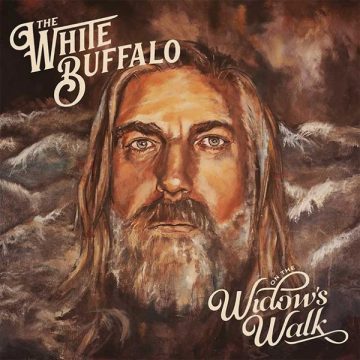 The White Buffalo
On The Widow’s Walk
Spinefarm Records

The White Buffalo, persona of one Jake Smith, has returned with a new album On the Widow’s Walk, an impressive collection of songs about the passing of time and the search for stability and identity in a world that often proves too slippery to ever get a good grip on. While the themes stretch, so too does the music, which over the course of the album blends many forms and styles from searching, gravelly rock to beautiful, often dark country-style ballads. Overall, they coalesce into a final product that gains depth and mystery as connections and themes emerge in what could be loosely thought of—with the exception of one or two tracks—as a concept album.

There is something of a mythical, Biblical quality to this album, evident in the cover art itself, as well as the mystique of The White Buffalo persona taken on by Jake Smith and the blustery power of his voice. The icing on the cake, however, or the nail in the coffin, if you prefer, is his ability to evoke place so vividly. These songs don’t take place in our world, but rather in a lost world, an Old World, where it is still possible to get lost in a forest or stranded offshore, a world full of overwhelming nature upon which the drama of each song plays itself out. In these songs, souls are adrift at sea, time is passing, and the implied sins accumulated by the speakers here are nearing their judgement day. The title of the album On the Widow’s Walk—a reference to the wives of sailors pacing anxiously as they looked toward the horizon, waiting for their husbands to return—is itself an invocation of a certain vague 19th century experience that imbues this album where every gain or loss was a symbol of a power greater than humans themselves.

Opening track “Problem Solution” is the longest on the album, but is unique in the way it changes tempos and uses variations on phrasing to progress ideas about uncertainty, insanity, and the general absence of something that should be present. “The Drifter” could easily be a lost track from Eddie Vedder’s Into the Wild soundtrack, establishing a spirit of exploration and escape from the confines of the civilized world that runs through the whole album. “Sycamore” is a strong track in which the speaker is longing for a better world and searching for stability, beautifully and emotionally rendered. “Cursive” is a beautiful slow track before the last half of the album grows darker. Tracks like “Widow’s Walk”, “River of Love and Loss”, and “The Rapture” are dramatic and spooky and give the album an eeriness that seems to emerge more on the back half.

In the end, On the Widow’s Walk is a strong addition to The White Buffalo catalogue, and the collaboration with producer Shooter Jennings has resulted in a collection of tracks that reverberate and reflect the spiritual longing of individuals in a tumultuous, uncooperative world, mythical or not.

Dan Kennard is an English teacher and fiction writer living outside Kansas City, Kansas where he lives with his wife, two children, and the cats.
RELATED ARTICLES
album reviewalbum reviewsjake smith
10