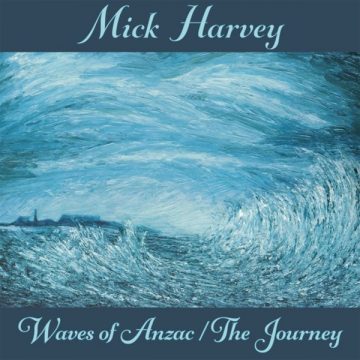 Mick Harvey has proven so far that he is an artist that is bound to surprise you, and in practically all cases, pleasantly. Not that some of his music is an easy listen, and he didn’t mean it to be. Nevertheless, his output is one of the most constant around.

With Waves of ANZAC/The Journey, Harvey comes up with his first soundtrack in 10 years–actually, two soundtracks, as Waves of ANZAC comes from a documentary dealing with personal stories connected with World War I. Journey, on the other hand, is a four-part composition released in support of a campaign working for Nauru child refugees.

Harvey’s previous album, The Rise and Fall of Edgar Bourchier and the Horrors of War, recorded in collaboration with Christopher Richard Barker, also dealt with World War I themes. While that album was a dense, heavy affair, but nonetheless engaging and rewarding, Waves of ANZAC is an all-instrumental one that can be compared to any recent modern classical suites, from great composers like Max Richter.

Journey is in a way a continuation of the same languid, contemplative thought. It is a four-part composition recorded with The Letter String Quartet.

Both soundtracks presented on the album are imbued with deep sadness, inspired by two different themes, but in many ways connected to these sad time we find ourselves in at the moment.

Formerly a lot of things, including a journalist and a translator, currently a freelance writer living in The Netherlands.
RELATED ARTICLES
album reviewalbum reviewsmick harvey
8.0