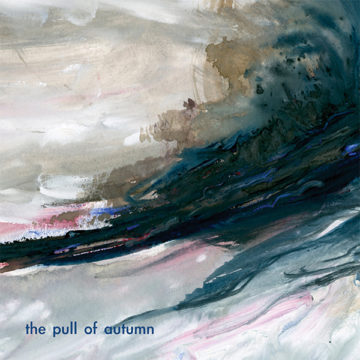 The Pull of Autumn is a supergroup of sorts, and the origins are a result of mutual admiration by two  very talented artists. Luke ‘Skyscraper’ James was a fan of the band Spectral Assignment, featuring one time Johanna’s House Of Glamour member, Daniel Darrow. Darrow, it turns out, was a huge fan of James and his band Fashion. After several emails, the two settled in to some writing and recording with a number of guests.  The end result, The Pull Of Autumn is a near perfect album.

It is difficult to separate the album from some of the background to the artists. Daniel Darrow’s wife, Laura Darrow, was a key member of Johanna’s House Of Glamour. She passed away in 2015. Her presence is felt throughout this album, right from the song “Laurasong” (written by former Johanna’s House Of  Glamour member, Bruce MacLeod, who also plays on the album). The song is a lovely tribute to her and his a clear highlight of the album.

Laura Darrow appears on the last track, a demo for the song “Elusive Love”, a song she co-wrote with Darrow and MacLeod. She also sings the beautiful song. Finally, the name of the band comes from one of her observations. Although the album is not a tribute to her, she is felt throughout. This just adds to the beauty and mood of the The Pull Of Autumn. But the album is clearly about loss.

This is an intelligent, extremely well-produced album. It could be described as an electronic folk album, with the influence of ambient music. One song flows into another and the overall effect is a consistent sound throughout. James brings his experience from Fashion into the mix, and as a result the added textures and layered sounds blend in perfectly.

It should be noted that there are guests throughout the album, such as Fred Abong (Belly, Throwing Muses). He wrote and plays on the astounding “Vanishing Spell” that fits into the album perfectly. Darrow’s son, Matthew, provides drums, and Bruce MacLeod contributes songs as well as keyboards. However, in the end, Darrow brings all of these elements together to form a consistent and cohesive album.

The Pull Of Autumn is a beautiful album. Pure and simple. Lyrically it is emotional and thought-provoking. It has perfect instrumentation and musicality. A great deal of care has gone into this album, from the front sleeve (a remarkable painting by James Johnson (who has provided artwork for Nick Cave and P.J. Harvey). The sleeve conveys a great deal and is an indication as to what they can expect  when they slip this album on to their turntable (or streaming device).

Born and raised in Whitby, Aaron discovered music through his love of The Beatles. This led to a career in radio, writing for various publications, and ultimately a radio show about The Beatles (Beatles Universe), which ran for over four years. When not immersed in music, Aaron enjoys spending time with the loves of his life -- his wife Andrea, and daughters Emily and Linda (all of whom have an intense love of music too).
RELATED ARTICLES
album reviewalbum reviewslaurasong
8.0