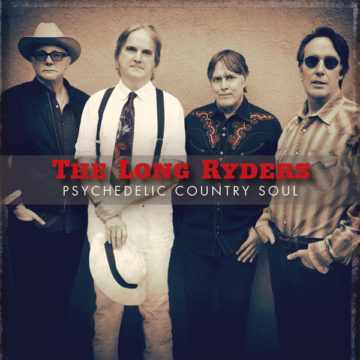 The Long Ryders put themselves at the forefront of Americana, as part of the Paisley Underground scene in the 1980s. Since disbanding in 1987, and re-forming several times over the past 30 years, they return on record with a collection of psychedelic-tinged roots rock.

As someone self-admittedly new to the band, albeit a lover of Americana, this album is chock full of genres. Produced by Ed Stasium (returning from 1987 LP Two-Fisted Tales), and recorded in eight days at Dr. Dre’s Record One studio in Los Angeles, The Long Ryders reclaim the throne of roots rock. From alternative-tinged (the Petty-esque “Greenville”), to country (the road trip essence of “California State Line”), to the stellar Roger McGuinn-inspired “If You Want To See Me Cry”, there’s something for everyone on the album. It’s a collection of 12 songs that will without a doubt be great listening for any road trip, preferably in small towns.

The group stays firmly planted in roots rock on the album, but true to its title, they detour into psychedelia. “Molly Somebody” features castanets during the bluesy guitar solo, and a reverb-drenched vocal canon in the fade-out, while the title track is a full-out romp, almost like a rootsy “Tomorrow Never Knows”.

The standouts include the aforementioned “See Me Cry” and the title track, as well as the group’s heartfelt cover of Petty’s “Walls”, given a raga rock arrangement, elevated by harmony vocals from fellow Paisley Underground band The Bangles. The other songs are no slouches either — obviously inspired by Petty, Dylan, and the Byrds’ Gene Clark, the latter of whom worked with the band some 30 years ago. Each song contains sounds of a band having fun. There’s heartbreak, there’s stops along the way, there’s places like Mobile or the California state border, but at the heart of each song is the tightness of a band.

Lead singer Sid Griffin noted that Psychedelic Country Soul was “the album we were always trying to make.” With its wide range of instruments and emotions, there’s a calm in each song, the end of a road. “Take me down to Mobile/take me down tonight,” he sings in the first song, “I will be alright/I will be alright.”

King Dawit considers himself the Psychedelic Cowboy. Raised on The Beatles, Queen, The Rolling Stones, and Crosby, Stills, Nash, & Young, you will never find Dawit listening to the same thing two days in a row, whether it be '70s progressive rock or late '60s Baroque pop. Dawit is also a Toronto-based writer, filmmaker, and music producer. Among his favourite writers are Hunter S. Thompson, Terry Southern and Lester Bangs.
RELATED ARTICLES
album reviewalbum reviewscherry red records
10