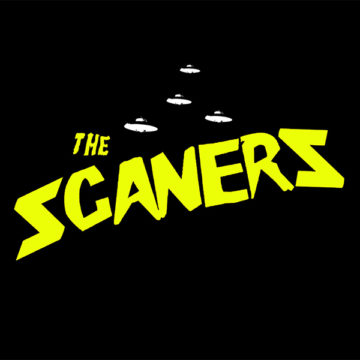 From Frank Sinatra crooning about being flown to the moon to David Bowie, the man who fell to Earth, popular music has had an on-and-off fascination with space and life beyond our planet.  For The Scaners, France’s latest punk sensation, the question of extra-terrestrial life isn’t actually a question, but rather a fact; one they are not only comfortable with, but, after listening to their debut self-titled record, they may even be co-conspirators with the little green men themselves.

From the opening power chords on the lightly-affected electric guitar of the album’s first song “Abduction” and the accompanying sci-fi-inspired soundscapes, the space theme is quite apparent from both a lyrical and musical perspective. In this sense, The Scaners is a very interesting record for the mere reason that in the simplest manner, the band managed to unite their music and lyrics thematically to reflect a neo-space-age adventure. Songs like “We Want to Talk to Your Leader” and “Levitation Train 2077,” among others, continue to build on this, making for a very fun album. It feels far too long since music — especially punk rock — concerned itself with the affairs beyond our planetary boarders.

In terms of music, The Scaners seem to be greatly inspired by the punk rock of The Ramones and the new wave direction that punk music took in the 1980s. Tracks like “Flying Fuck” and “I Don’t Want to Go” stand out for their grit — the latter taking the form of an anti-war anthem — while not losing their sense of fun and excitement that is at the centre of the album. That being said, certain elements of the mixing behind the album feel a bit rough and inconsistent, making some songs feel smaller than others while buried under less discernible frequencies. While this does not stop The Scaners from being a good album, it does not make it feel like as much of a landmark record as it could be.

If their debut is a sign of things to come, The Scaners is definitely a band to watch out for. While Dirty Water Records tends to represent punk bands who resemble the punk and proto-punk styles of the 1960s and ’70s, The Scaners are a solid throwback to the 1980s punk and new wave with a space-age edge that makes them stand out amongst their peers.

A passion for music has always been a part of Gerrod’s life. As a young boy, he was raised on a steady diet of the music from The Chili Peppers, Aerosmith, The Stones, Prince, and others from his mum. Raised in the GTA, Gerrod continued to foster his love for music by attending a wide range of concerts and learning the drums. His unapologetic passion for music has no bounds and has spread to a wide variety of styles, whether it be the 90’s rock that sound tracked his teenage years, the jazz he studied in university, or his newfound love for hip-hop. He recently received his bachelors in music and education from York University and is passionate about writing and reviewing good (and less than good) music. Gerrod is also the drummer and songwriter for a Toronto based rock & roll band, One In The Chamber.
RELATED ARTICLES
album reviews
9.0