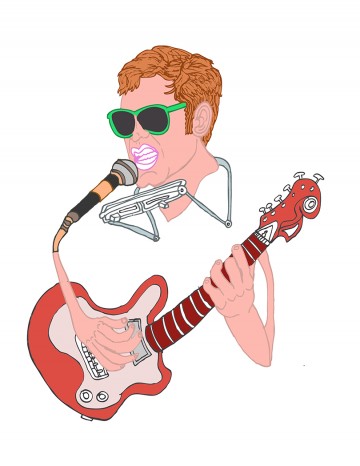 “Everyone was like, ‘What the F? You’re going to change your name to Banana Bread?!’”

Many of us are already making arrangements to relocate to Chad VanGaalen’s universe.  The world as we know it seems to be disintegrating by the minute, so any hint of a means of escape has serious currency.  Over the last ten to fifteen years, CVG has been producing living maps in songs, drawings, modified instruments, animations and performances–shifting forms pointing to another world, infinitely more liveable, maybe hidden just under the surface of our own.  But until now, the access point has been fairly unknown.

When I first visited Chad’s home in Calgary, Alberta, years ago, he was working on plans to build a giant grinning monster head on his roof, which could be seen from the windows of a children’s hospital on the hill overlooking. I also recall two young men at a show near the Banff Centre for the Arts, calling him out on stage for an art piece he had made there years before: a literal piece of shit in a hot dog bun.  This led to Chad and band improvising a new composition on the spot, with the chorus, “Shit In A Hot Dog Bun, Yeah.”

Now, a father of two, the spooky-voiced multi-instrumentalist has several hundred releases to his name(s)*, has produced adventurous records and videos for some of the best bands of our time, is working on a feature-length animated science fiction film with companion book, and plays in two bands with his kids (the improvised hardcore punk duo, Crocodile Teeth & The Snugglers, and the live techno band, Banana Bread).  At one point, Chad and his daughters conspired to replace the name, “Chad VanGaalen” with “Banana Bread,” as his main performing identity.

CVG’s blood flows by unrestrained creative impulses.  He has never worked in a commercial recording studio.  By his hands alone, one line, sound, shape or word leads organically to the next. In 2011, he wanted to score a science fiction film, so he started making one. The first episode of his animated feature, Translated Log of Inhabitants, should be released this year, with a fully illustrated D&D-esque compendium of 150 associated characters.

Shrink Dust, his fifth full-length album under his own name, is partially a score to this film, but it’s also—in Chad’s view—a country record.

Always a fan of esoteric instruments, Chad recently acquired an aluminum pedal steel guitar, and began trying to figure out how to play it: “It took me a month to set it up, and a year to be comfortable recording myself playing this thing.”  His experiments with this instrument unify the album, along with themes of death, transformation, fear, benign evil, and the eccentricity of love.  A newfound affection for The Flying Burrito Brothers, and the sci-fi mysticism of the 1980s graphic novel The Incal by Alejandro Jodorowsky and Moebius, were also significant in recent years.

Somehow, with all of its disparate influences and components, Shrink Dust might be one of the most accessible moments in CVG’s creative life, simply because it is more apparent than ever how much fun he is having blurring the lines between the vivid worlds of his creation, and the world his audience inhabits.  For those who are open to it, Chad’s adventures in music and art illuminate a path that is more colorful, playful, and sustainable than those commonly available to us.  A path that is, most importantly, always changeable.

You can see and hear his alternate reality through the artifacts he offers up.  But as it turns out, the only true access point into Chad VanGaalen’s expanding universe is one’s own will to create.

Daniel is an illustrator/graphic designer based out of Austin Texas. He graduated from Pratt Institute with a Bachelors degree in Illustration and an Associates degree in Graphic Design. Daniel started his career in graphic design in the world of online casinos. Since then he’s worked with various clients from around the United States and Canada including but not limited to NHL, Subway, Paraco Propane, Pitney Bowes, Xerox, Conduent, Nestle Waters, The Spill Magazine, Stamford CT’s DSSD, Beechnut Baby Foods, Elizabeth Arden and much more.
RELATED ARTICLES
chad vangaalendaniel adamsportraits