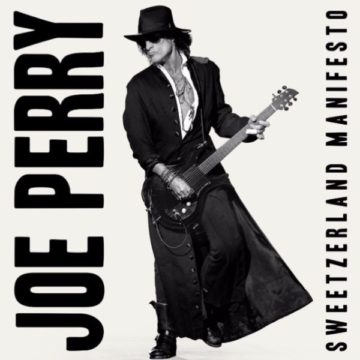 A true legend of the 1970s best known for his work as the lead guitarist from arguably the best hard-rock band of the era, Aerosmith, Joe Perry has released his eighth solo record, Sweetzerland Manifesto. For his first full-length solo release since 2009’s Have Guitar, Will Travel, and his first recording venture since The Hollywood Vampires’ self-titled 2015 debut, Perry is joined by an all-star rotating cast of acclaimed vocalists, including Cheap Trick’s Robin Zander and The New York Dolls’s David Johansen, to deliver a record that stands among the best of his solo material.

Sweetzerland Manifesto opens with the African-inspired chants and rhythms of “Rumble in the Jungle.” The solo tribal-influenced vocals and percussion prove to be a striking contrast to the ripping tones of Perry’s electric guitar which at times play underneath everything, while at other times takes the forefront in an intense and tasteful manner. Ultimately, the highly-experimental track successfully bridges the blues of today with its very deep roots in Africa, and proves to be a very exciting opening to the record. While the chants of “Rumble in the Jungle” are used in more of an atmospheric and instrumental manner, the following song, “I’ll Do Happiness,” stars vocalist Terry Reid and is an absolutely dirty blues track that is driven by a sludgy shuffle, fuzzy bass, and Perry’s slinky and sparse guitar licks that pair with the natural and warm rasp of Reid’s vocals. The other two tracks that feature Reid, “Sick & Tired” and the closing track “Won’t Let Me Go,” are just as great to listen to, with the former taking a more straight-ahead rock approach and the latter sounding like it crawled straight from the dark, swampy depths of the delta.

That being said, there really isn’t a weak track on the record. Perry’s sole collaboration on “Aye, Aye, Aye” with Zander takes a straight-ahead ’70s rock ’n’ roll approach that is reminiscent of The Who and early material from Aerosmith. Meanwhile, his work with Johansen feels softer yet grittier in tone. Whether it is the acoustic-driven melodies of “I Wanna Roll” or the classic take on traditional blues form of “Haberdasher Blues,” these songs feel fresh while steeped in more than half a century of the blues.

What stands out most on the record, however, are “Spanish Sushi” and “Eve of Destruction.” “Spanish Sushi” is a fiery instrumental composition with a slick riff, subtle and haunting synths, and solos that were crafted to tell a melodic narrative in a fashion only a master of one’s craft could do. We all know Perry can shred; so much so that his contributions to the guitar in the mid-’70s paralleled that of Led Zeppelin’s Jimmy Page, but the demonstrated restraint in favour of dynamics, melody, and style is incredibly tasteful, making it stand among some of the most stirring instrumental numbers in rock history. Perry’s cover of P. F. Sloan’s politically-charged 1964 anthem “Eve of Destruction” stands out for not only the fact that it is the only track to feature Perry’s vocals — sounding gravelly and dark in a manner similar to that of Keith Richards’ — but for the song’s continued social relevance, over fifty years later. Originally written in protest of the Vietnam War, Perry’s choice of the cover feels very intentional; like a daunting reminder that we are seemingly slipping back at an accelerated pace rather than moving forward.

Sweetzerland Manifesto, in short, is a brilliant album from one of rock ’n’ roll’s greatest musical voices. It is a record that captures inspiration from a number of different eras of blues and rock in a manner that is unmistakably characteristic of Perry’s song-writing and guitar-playing. While his collaborations with Zander, Reid, and Johansen are along the same quality in which other guitar heroes have taken on records featuring a variety of singers — ranging from Slash to Santana — the inclusion of two instrumental tracks, “Rumble in the Jungle” and “Spanish Sushi,” and the Perry-led “Eve of Destruction” leave me longing for more jams and tracks featuring Perry’s dark, bellowing voice. It ultimately leaves one excited for what the future holds for the guitarist and the rumored Aerosmith album that is potentially on the way. Regardless, Sweetzerland Manifesto is a refreshing album that reaffirms Perry’s legendary status as a shaper of rock whose song-writing and performance are still furthering the continuum of the genre. Perry proves to be just as innovating and exciting to listen to as he is on Toys In The Attic (1975), Rocks (1976), Get A Grip (1993), and Honkin’ On Bobo (2004), ultimately giving Sweetzerland Manifesto the quality of a modern classic.

A passion for music has always been a part of Gerrod’s life. As a young boy, he was raised on a steady diet of the music from The Chili Peppers, Aerosmith, The Stones, Prince, and others from his mum. Raised in the GTA, Gerrod continued to foster his love for music by attending a wide range of concerts and learning the drums. His unapologetic passion for music has no bounds and has spread to a wide variety of styles, whether it be the 90’s rock that sound tracked his teenage years, the jazz he studied in university, or his newfound love for hip-hop. He recently received his bachelors in music and education from York University and is passionate about writing and reviewing good (and less than good) music. Gerrod is also the drummer and songwriter for a Toronto based rock & roll band, One In The Chamber.
RELATED ARTICLES
aerosmithalbum reviewsjoe perry