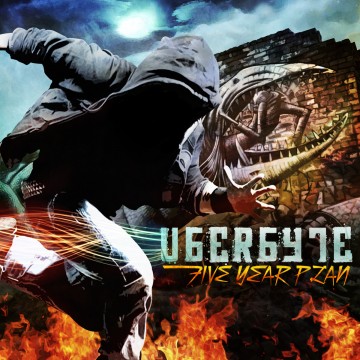 Sheffield England’s Uberbyte is a five piece Electronic band that made their debut in 2007 and has five full-length releases in their discography. Their latest album, Five Year Plan, opens with a real banger called “Sheffields Finest.” This is what club anthems are made of. Powerful dancefloor beats, acid leads, catchy repetitive samples and sexy female vocals. This is a great opener for the album. From here, the record mostly takes a turn downward.

“Archetype” opens with an epic-style vocal that doesn’t seem to fit the music as much as it might fit a guitar-based Rock ballad. As the track progresses, the vocal production proves to be simple with an emphasis on the melody and overall vocal control, with less attention paid to sonic compatibility with the music. This seems to set a trend for the male vocals throughout the rest of the album. While the vocals are often the center of attention for Synth-pop, in the case of Five Year Plan, the male vocals should have been set back behind the music or processed to add more texture. They have the tendency to come across as cheesy and they often distract from the beautiful production of the synths and drum machines. The female vocals often work quite well, as is the case in “We Like The Bass,” a standout track conveying a more underground, ‘authentic’ type of sound. Straight from the Trance mold is the track “Summer.” Guest vocalist Lauren Krothe, of the band Panzer AG, lends a beautiful, perfectly fitting vocal to the uplifting sounds of the music. The obvious use of Auto-Tune as a vocal effect, however, could have been left off. In fact, Auto-Tune is used as an effect on many of the songs, and it’s merely a distraction from otherwise nice music production. The rest of the album is made up of tracks that follow the similar hard Trance formula, with the instrumental, “Cthulu Waits,” included to break things up a bit. Uberbyte are talented musicians that have delivered a skilled album that is unfortunately hindered by lackluster, incompatible vocals.