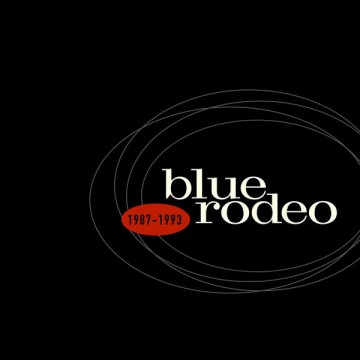 Blue Rodeo has reached a glorious milestone. Twenty-five years ago Outskirts (1987) was released and launched the band into the Canadian and international music scene. According to Jason Schneider, who penned the essay that accompanies the Blue Rodeo: 1987-1993 collection, the “airwaves were flooded with MTV’s big stars, and even established artists all too often embarrassed themselves trying to play by the American video channel’s new rules. It was a game that Jim Cuddy and Greg Keelor didn’t want to play, and being on the outside of it only reinforced the bond they shared as friends and musical partners.” This in essence is the best way to describe this box set of Blue Rodeo’s first five studio releases. As a band they did not fit any of the many genres vying for fame and fortune. They focused on writing timeless and memorable music, and in turn have become an integral part of the Canadian mosaic.

Containing eight discs, including two versions ’87s Outskirts and ’91s Casino, along with the era’s other three albums and a bonus Odds & Ends disc, this box set is perhaps the best way to celebrate Canada’s most prolifically lyrical muse.

Blue Rodeo is to music what ice is to our national sport (no not Lacrosse, the other one). In the last twenty-five years Blue Rodeo has quietly gone about their business and this set of rarities and re-mastered recordings fits nicely into any musical collection, small or large.

If you’re new to Blue Rodeo, you will finally own their five quintessential recordings, being led through uniquely Canadian landscapes and experiences. The songwriting synergy of Keelor and Cuddy is rare, especially here in Canada.

If you’re lucky enough to own all the previous albums, this box refreshes the senses and tweaks the sounds and brings them to a different level of musical maturity. The demos demonstrate that the life of a musician truly is a journey, one that constantly forces him to adapt and change. There are also a number of songs here that can be considered hidden gems which simply didn’t fit anywhere and were sadly orphaned at the time. Finally these tracks find a home here on this great compilation.

It’s time to fall in love again with Blue Rodeo.

Grzegorz Kieszkowski originally hails from Bydgoszcz, Poland. After his father was released from prison in 1984, for his involvement with the Solidarity movement, Greg and his family escaped to Canada in 1985. He makes Cobourg his home, along with his wife and two small children. Greg is a graduate of York University, with a double major in English and Philosophy. Music has always been in his blood, and although his tastes have matured, he will always have a soft spot for the Metal days of the late 1980’s. He is a full time English teacher and a professional photographer. Part of the allure of writing is the possibility of conversation, and he would love to hear your comments and opinions. Please feel free to visit his personal website - grzegorzkieszkowski.com.
RELATED ARTICLES
album reviewsblue rodeo
8.0