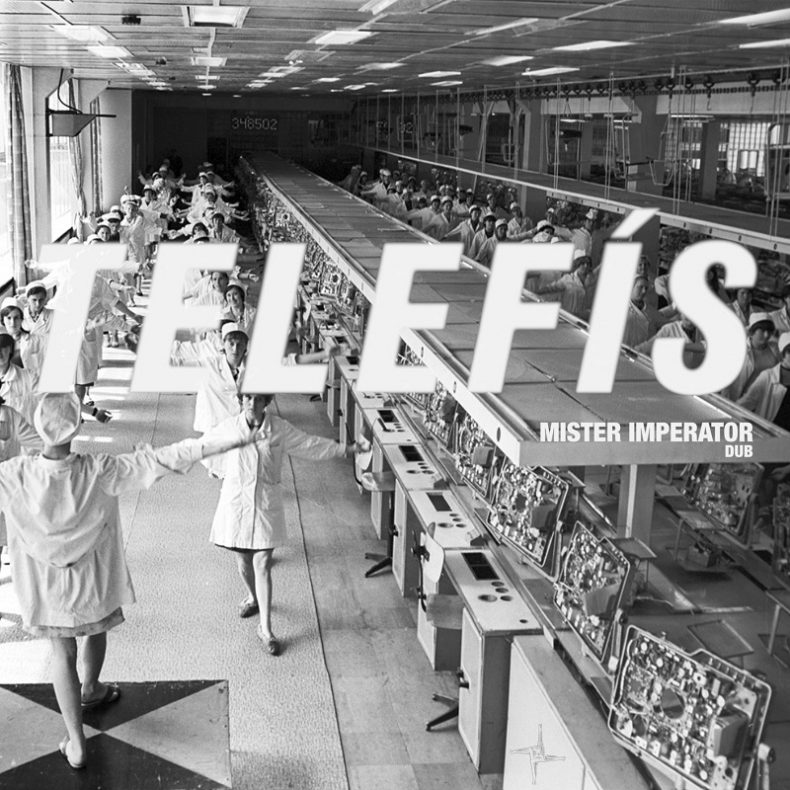 Earlier this year we introduced our readers to the album Song of Co-Aklan by Irish anti-establishment post-everything songwriting genius Cathal Coughlan, who is also famed as frontman of Microdisney and The Fatima Mansions, not to mention the success of his many acclaimed solo works. He is once again back in action with a new release jointly with legendary producer Garret “Jacknife” Lee, whose career roller coaster includes numerous releases by such musical kingpins as U2, R.E.M., Modest Mouse, The Cars, The Killers, Snow Patrol, Crystal Castles, Editors and even Taylor Swift.

Called Telefís (the Irish Gaelic word for Television, pronounced Tele-feesh), this collaboration took root over many exchanges but will surely blossom as we understand this is the first of numerous releases by the duo forthcoming via the London-based independent label-par-excellence Dimple Discs. February 11 is the album’s release date but today we have the pleasure of premiering ‘Mister Imperator (Dub Mix)’, an invigorated and deliciously twisted new take on the duo’s recently-released ‘Mister Imperator’ single.

The second single from the album, ‘Mister Imperator’ is a deliciously retro-electro affair that loosely recounts the tale of a beloved pianist, who was a light entertainment staple of early TV fare dating back to the first broadcasts in The Irish Republic in 1961. The first offerings from these Irish music legends sounds as stunning as the best of Talking Heads and LCD Soundsystem, to draw just two parallels. This project may be rooted in the insular cultural experience of a small country, but just watch them take the world by storm with this big sound and vision here and now.

Titled a hAon (Number One), their forthcoming 13-track album by the two acclaimed Irish iconoclasts, which is part celebration and part satire. All of the material for the videos presented so far originated (and were shown on Irish TV ages ago). The images obviously had a lasting impression, spawning their satirical and even mischievous examination of Irish history and the pop culture of their lifetimes. They have likely hit the nail on the head in referring to this programming with the term “a corrosive nostalgia”.

Telefís’ experience pertained to what they saw themselves, living in a culturally sealed-off small country surrounded by sea, there are obvious parallels to the content fed TV-viewers in other countries. With reference to today’s society itself, the duo also points a critical finger at today’s global hierarchies, an inspiration for the strange characters and caricatures that spring from Coughlan’s fertile imagination. Stark forms of imagery, bizarre to the modern eye and ear but treated as routine in the pre-globalization world, are pushed at the listener and viewer.

“I’d just finished mangling a Luke Haines and Peter Buck record. Luke knows Cathal and re-introduced us. On the first or second correspondence we thought we should make some music together. Music is probably the only way I can properly communicate with someone. I sent Cathal the backing track that would become ‘We Need’ and he sent me back the vocal and we went back and forth from there. Lockdowns and travel restrictions forced us to work remotely, and I think helped us get to where we got so quickly,” says Jacknife Lee.

“Cathal is, without doubt, one of the finest lyricists of our time and writes like no one else. Some of the vocals he sent over made me burst out laughing with giddiness and delight at the novelty of them. Mischievous, dark, arcane, crispy fresh, and always unexpected. Every song with a backstory that could be a novel. This is easily the most enjoyable and rewarding music that I’ve been involved with”.

Indeed, evidence of Coughlan’s lyrical ingenuity and artistry was on full display earlier this year when he returned after a 10-year absence with a highly acclaimed solo album Song Of Co-Aklan’

On the musical side, Jacknife Lee uses his extensive sonic palette to create an irresistible mix of cinematic instrumentals and electro-funk backdrops full of melodic, squelchy synths and thunderous bass-lines, often with a cheeky nod to electro-pop history. He has also created remixes for such artists as Radiohead, U2, Blur, Run-DMC, Pink, Future Sound of London, Christina Aguilera, TLC, Missy Elliott, Busta Rhymes, Eminem, The Raveonettes, Kraftwerk, New Order and Kasabian.

Cathal observes, “Collaborating in this way, with a dynamic and consummate artist, who has access to a wide range of skills that I don’t have, but with whom I share many common interests and cultural/historical reference points, has been one of the highlights of my creative life. It’s made me so glad that I’ve been able to remain active for long enough to see something like this happen. Easily as spontaneous and full of surprises as any in-person collaboration, it’s shaken loose many weird and hopefully wonderful things in my verbal workshop. And nobody has heard me use my voice in some of these ways before now, either”.

As of November 5, ‘Mister Imperator (Dub Mix)’ will be available everywhere digitally, including Spotify, Apple Music and Bandcamp. On February 11, the a hAon LP will be released on CD and vinyl (both with a two-sided lyric sheet insert) and can be pre-ordered at https://ffm.to/telefisahaon. It will also be released on all digital platforms, available at https://orcd.co/telefisahaon.

Also check out the original version of ‘Mister Imperator’ and another remix that followed:

by Ljubinko Zivkovic on March 25, 2022
Telefís a hAon Dimple Discs Calling your new project television using the English language would definitely imply you are copying the Tom Verlaine and co. legendary outfit, even though the project [...]
8.0