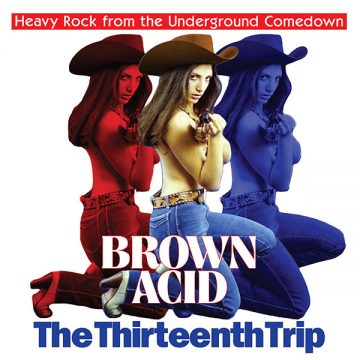 Those who are already following this series, possibly now have one question – when are RidingEasy Records head Daniel Hall and his crate-digging partner Lance Barresi, co-owner of L.A.’s Permanent Records, going to start coming up with some crap-heavy psych, hard rock, proto-metal stuff from the end of the 60s up to mid-70s?

The answer is still – not yet. After the (lucky)13th edition of the series, one thing is becoming evident, it seems that at that time everybody was playing an electric guitar, and quite a few of those people really knew how to play it well. Oh, and they knew what it should sound like. These days it is synths and laptops that are all the rage, so in a few decades we might get a series featuring those. Of course, for those who will fancy that.

Here, though, it is the same old (for some, new) guitar crunch, the kind that works, like on the opener “Run Run” and the quality not easing until the closing “Detroit” (MC5 and The Stooges, anyone?), making the choice fit the title of one of the best here – “Indecision.” Maybe those with inclinations towards the bluesier stuff will go for “Hope” and “Feelin’ Dead.”

Fans of the series will probably need no convincing here and for those who want to start somewhere with the series, this is as good place as any.

Formerly a lot of things, including a journalist and a translator, currently a freelance writer living in The Netherlands.
RELATED ARTICLES
album reviewalbum reviewsbrown acid
7.0