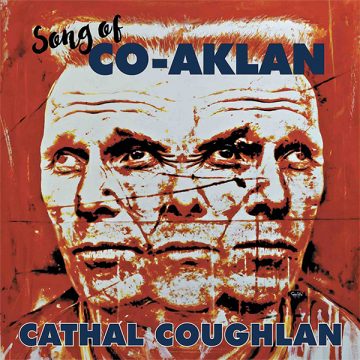 If you are able to name one of the cult artists from the Irish music scene, the name of Cathal Coughlan would be probably one of the first to come to mind. The albums he made in the ‘80s and ’90s with Micro Disney and The Fatima Mansions remain as some of the most cherished among the fans of what some call intelligent pop. Coughlan is the one responsible for some intricate melodic twists and lyrics to wrap your mind around.

While he has had solo releases in the new millennium, he seems to have been absent for a while, maybe a bit too long. Now he is back with Song of Co-Aklan, reminding us of what a musical force he really is.

Supported by the likes of Luke Haines (The Auteurs, Black Box Recorder), Nick Allum (The Fatima Mansions, The Apartments), and Audrey Riley (who collaborated with almost everybody from The Smiths to Nick Cave), Coughlan’s musical vision remains as original and as strong as when he first came up. Somehow, he now fits perfectly with something that can be called Irish rock vision, along with his compatriot Neil Hannon and his The Divine Comedy. Both have an excellent touch for musical complexity you can easily listen to and lyrical capabilities, many could envy.

Song of Co-Aklan is proof that modern music needs artists like Coughlan.

Formerly a lot of things, including a journalist and a translator, currently a freelance writer living in The Netherlands.
RELATED ARTICLES
album premierealbum reviewalbum reviews