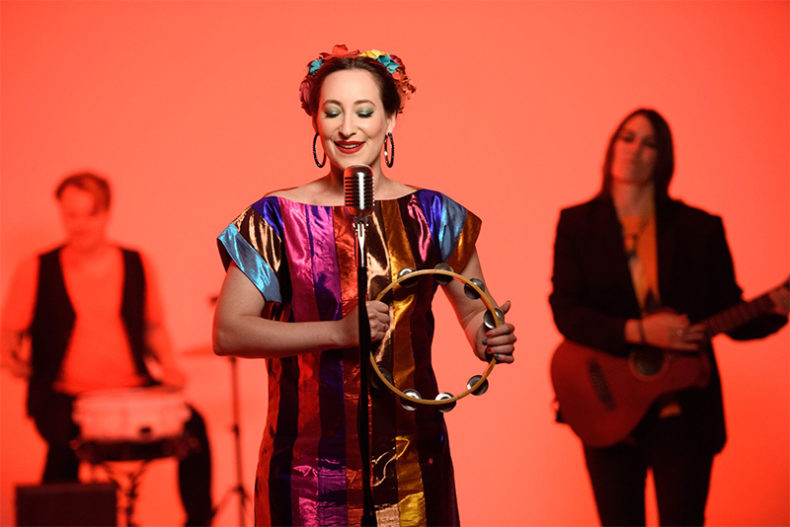 Rachael Sage’s new video for “Alive” is arguably her most ambitious yet, featuring world-class choreography, a prodigious lead dancer sporting a leotard hand-painted by Sage herself, band cameos, several vibrant costume changes and an iconic, Warhol-inspired lighting scheme. Shot in a Brooklyn loft and featuring pint-sized “Dance Moms” star Elliana Walmsley, the dynamic clip was directed by Nick Clark and choreographed by Gianna Martello (also of “Dance Moms”). A former ballet dancer herself, Sage is no stranger to featuring dance talent in her music videos but from the opening gestures, it becomes clear that she and Walmsley have a unique connection, even though they never appear on screen together. An unabashed anthem about relishing life to the fullest and appreciating every moment with an intensity fueled by an artists’ unwavering passion, it’s only fitting that Sage’s costuming nods to her idol Frida Kahlo (who is also referenced lyrically in the first and last verses). If you’re looking for a song with pure locomotive energy that reminds us all to appreciate the very essence of living – even amidst these turbulent times – this is the video for you.

“‘Alive’ is the most upbeat, positive song on my new album Myopia, and after I wrote it I felt very protective of it – like there was something precious about remembering to appreciate the gift of simply living, even as the world becomes ever-more chaotic. There’s a sense of anticipation and optimism in the lyrics, from the get-go…and it was very important to me that we capture the pure exuberance of the music via the movement of our brilliant young dancer Elliana Walmsley, whose sheer stamina was nothing short of staggering, on set; watching her fly through the air take after take with a smile on her face, bursting with the sheer joy of doing what she loves – however arduous – literally gave me hope for our future!”