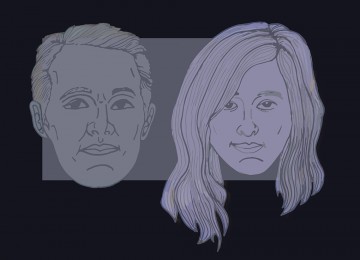 Whitehorse’s story has been told as two acclaimed musicians joining forces under one new name – no drummer, no keyboard player, violinist or even bass player on call, and no producer. Just Luke Doucet and Melissa McClelland The first album and EP demonstrate the success of this simple equation, one plus one, with an abundance of guitar slinging, songwriting expertise and white-hot desire.

Of course, the live show has been anything but simple. Melissa and Luke present a full band sound using live loops, bits and pieces percussion, and swapping guitars left right and centre on stage. By the time Whitehorse took to the stage at Toronto’s esteemed Massey Hall for their sold-out debut in 2013, the edge of the ledge effect of their earliest shows had transformed into a nimble ballet of moving instruments, layers of percussion, voice and keys, layered upon each other.

Now, with the sophomore LP Leave No Bridge Unburned, Whitehorse messes with the math. The duo hired ex-pat producer Gus Van Go to make the record. The three met at the 2013 Polaris Music Prize Gala, where Whitehorse performed as a Short List nominee for The Fate of the World Depends on This Kiss. With this move, Whitehorse’s studio team instantly doubled – Gus and his frequent collaborator Werner F transformed the duo’s song-making dynamic into a group conversation. Leave No Bridge Unburned signals a new era for Whitehorse, a time of expanded musical influence and community.

There are songs that tap into Luke and Melissa’s shared fascination with the American south. Opening track “Baby What’s Wrong” is the story of a creepy lover told with an evil twang, an even darker version of Calexico’s “desert noir.” The mariachi trumpet of “You Get Older,” about a human smuggler with an existential side, also conjures the burnt-out border towns, stray dogs and rooster crows that populate Spaghetti Westerns, Southern Gothic novels and dusty post-apocalyptic landscapes.

Another recurring Whitehorse theme is the urban/suburban divide which clefts political, social and artistic factions. Cities, specifically New York and Toronto, never cease to inspire the two. “Downtown” points to Toronto’s mayoral debacle, a local media circus and international embarrassment, but also the loneliness of urban living and the gulf between left and right. “Dear Irony” romances detachment while also wondering what good comes of it, a song also peppered with New York references and a city street vibe.

And then there’s the love song. Leave No Bridge Unburned contains what Melissa calls her first real love song for Luke. “Sweet Disaster” channels slinky, stylized Bond themes and Sixties R&B in a story about one rich man’s quest to send a couple to Mars. Fitting, for a band best described as “space cowboy lovebirds” (Now Magazine, Toronto).

Whitehorse formed in 2010 by husband and wife solo musicians Luke Doucet and Melissa McClelland. The two toured in each other’s bands for years, but they put aside their award winning individual careers to build a new band out of their exceptional guitar playing, his and her harmonies and a flair for dramatic, narrative songwriting. Whitehorse has since been nominated for the Polaris Short List (2013) for The Fate of the World Depends on This Kiss, played sold out shows across Canada, and established itself in the USA as a band to watch with stellar reviews for The Fate of the World…, only their first full-length album.

Leave No Bridge Unburned sees Whitehorse shaping a bigger, bolder rock sound. Any lingering assumptions that the two are working within the boundaries of a folk duo should be put to rest. Leave No Bridge Unburned is a fiery, forceful and finely tuned album. While there’s more in the mix now, more people at the board, more sonic swagger in the ears, Whitehorse will continue to be a story told of intimacy and passion. Two musicians, one band, no looking back.

Leave No Bridge Unburned was released by Six Shooter Records on February 17, 2015.

Daniel is an illustrator/graphic designer based out of Austin Texas. He graduated from Pratt Institute with a Bachelors degree in Illustration and an Associates degree in Graphic Design. Daniel started his career in graphic design in the world of online casinos. Since then he’s worked with various clients from around the United States and Canada including but not limited to NHL, Subway, Paraco Propane, Pitney Bowes, Xerox, Conduent, Nestle Waters, The Spill Magazine, Stamford CT’s DSSD, Beechnut Baby Foods, Elizabeth Arden and much more.
RELATED ARTICLES
daniel adamsportraitswhitehorse