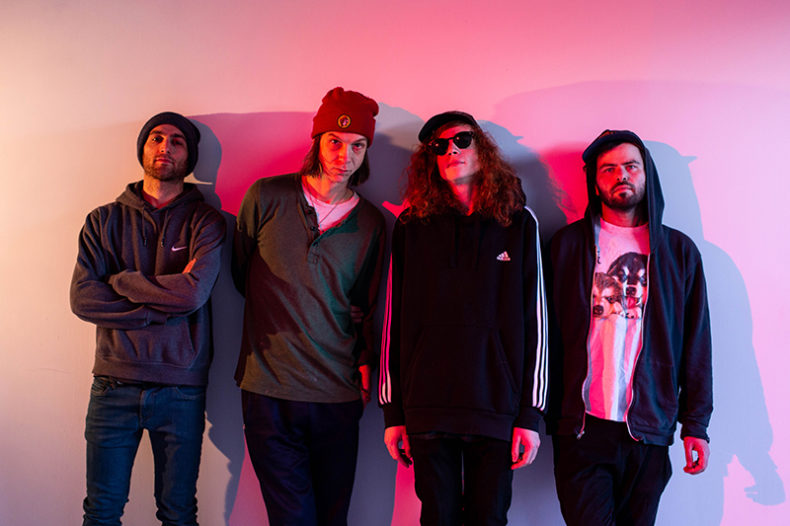 
WIVES today announced their debut album, So Removed, will be released on October 4, 2019 via City Slang. The Queens, NY-based four-piece has also shared a new single “The 20 Teens;” singer/guitarist Jay Beach cites hearing A Flock Of Seagulls blaring at a Bushwick restaurant and thinking all of the lyrics might as well have been, “This is the ‘80s, this is the ‘80s,” and took his own stab at doing a track for the 2010s. “The 20 Teens” follows a stoned narrator enveloped by delusions of grandeur before being brought back down to earth, the chorus an exalted refrain of mundanity. Listen now HERE. The song is the third released from So Removed, following “Workin’” and “Waving Past Nirvana,” the latter of which is the A-side of the band’s debut 7” (b/w ‘Kinda Like You’) that arrived in stores last Friday, May 24th.

WIVES is the latest fit into a long lineage of New York’s gritty, melodic-meets-punk bands. So Removed is grungy dark-wave, tethered to daily anxiety without resorting to cynicism. The noisy dissonance of Sonic Youth, the edgy hooks of early Pixies, and the clever, cerebral sneering of the Fall simmer as touchstones within the album, sharp and prodding at the details, pulsing with urgency. So Removed plunges into the void of unknown, a tangle of contemporary dread and optimism, mapping the gray areas of alienation.

WIVES is Beach, Adam Sachs on drums, Andrew Bailey (also of DIIV) on guitar, and Alex Crawford on bass. Embedded in New York’s DIY music scene through their respective projects, with years of playing house shows and booking their own tours under their belts, it wasn’t until a random day of extra studio time booked for another project that the four of them actually played together. So Removed came together in stolen moments, mainly during off-hours, with the band doing much of the recording themselves — as such, it ripples with a visceral intensity and a live-to-tape sound.

“Waving Past Nirvana” is a sort of thesis for WIVES’ sound, delving unabashedly into a sense of feeling removed, its narrator rejecting spiritual enlightenment. Beach recounts bringing the idea to the studio and the rest of the band totally elevating the bones of the track: “It’s a function of me trying to be a mixture between Kool Keith and Lou Reed and failing, and the band being much sharper than me, and me then living up to the band’s track as they performed it.” The bulk of WIVES’ songs oscillate between macro and micro, veering from a zoom-in on the tiny everyday details to a sprawling pan over the world at large. “It’s picaresque – it’s almost a memoir, or auto-fiction, or maybe even speculative autobiography,” Beach explains of So Removed. “It’s narrative-driven fiction, but through the lens of personal experience.”

WIVES recently wrapped up their first trip overseas for a UK/European tour, in addition to performing at WXPN’s NON-COMMvention in Philadelphia earlier this month. More touring news will be announced soon.

SPILL NEWS strives to keep our readers up to date with news and events in the music industry. We keep you informed of the most recent information regarding new releases, tour dates, and information items about your favourite artists.
RELATED ARTICLES
city slangnewsso removed
9.0

by Aaron Badgley on February 9, 2018
Son Lux Brighter Wounds City Slang Brighter Wounds is the breakthrough album for Son Lux. Son Lux has been teetering towards the next level for a couple of years. Soundtracks, concerts, [...]
8.0

by Norman Darwen on February 10, 2017
Sinkane Life & Livin’ It City Slang Now here’s one of the good things about globalisation. The beautifully gentle singer Sinkane, given name Ahmed Gallab and of Sudanese heritage, was [...]