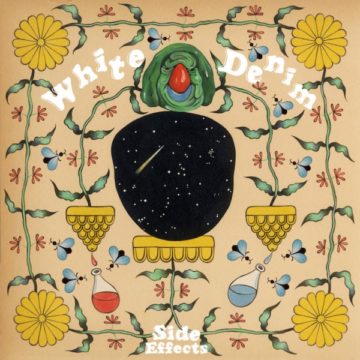 The latest offering from White Denim continues where they left off — exactly right where we wanted them to. Their eighth album, Side Effects, is the continuation of Performance for all of us wanting more. An unabbreviated encore for the crowd who never left. Again, this album delivers as fast and dirty as the last. Chopped and mashed, with strange samples and a lotta whammy, the experience of listening to this album is unlike anything I’ve ever experienced. It’s impossible to place yourself at any point in time, any place real or make-believe. Last August, Performance was the tab under our tongue, now as if we are finally waking from our psychedelic trip with a new outlook on life, a matured vision of how the future should play out, why money shouldn’t exist, and so on, this was the comedown from our eight month drug induced coma. Side Effects opens with “Small Talk (Feeling  Control)” which is sort of like the near-death experience you had on the way to work, it awakens the listener like a lack of oxygen, an unbreathable open. Immediately you are thrown the meat of the album – which in my opinion are the most memorable, “Hallelujah Strike Gold”, “Shanalala” and “NY Money” – all of which are the most rock ‘n’ roll dedicated. These three hit the album the hardest, scrambled into an oblivion, “Out of Doors“ is the intermission before the second act – a lovely, floaty instrumental dream. While the tempo seemingly changed following this halfway point – the album finished with this out of sorts combination of ascending and descending progressions. The album flips to a harder version of a band that h has continually evolved since their early albums. White Denim is totally restless in creating the best music of their careers, continuously out-performing and outgrowing their pasts.

Originally from NJ, Nicholas is an architect residing in Toronto. His most memorable moments in music: Crying during Roger Waters set at Newport Folk Festival, Nas performing all of Illmatic at Governors Ball, and Manchester Orchestra performing Cope in a church in New Haven, Connecticut.
RELATED ARTICLES
album reviewalbum reviewscity slang
8.0