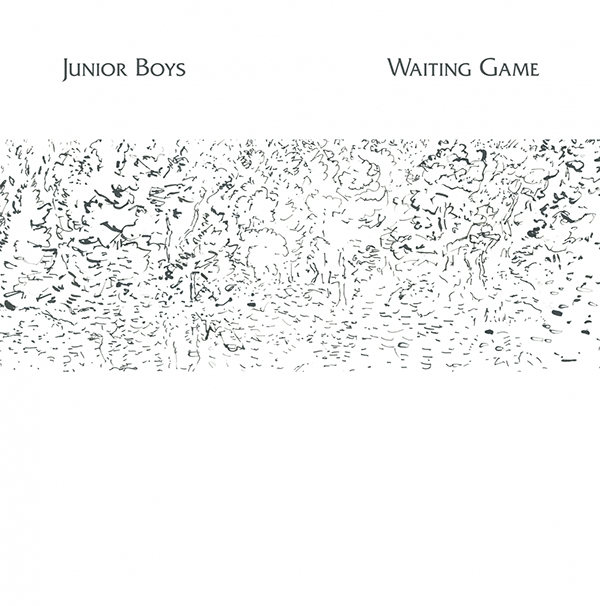 In the years since making Big Black Coat, Greenspan co-produced and mixed two albums for Jessy Lanza, cared for and then mourned his father, and built a recording studio in Hamilton. In early 2020, Didemus joined Greenspan there, jamming and recording for several weeks before returning home; by March, the Covid-19 pandemic forced the world into lockdown.

In this uncertain period, drawing from Didemus’s co-writing and musicianship, Greenspan wrote and recorded Waiting Game. The album’s additional musicians are Canadians, too; Caribou collaborator Colin Fisher performs saxophone throughout and Bonjay frontwoman Alanna Stuart supplies vocals on a track.

In the spring of 2020, Greenspan walked Hamilton’s lake and waterfall trails and listened to music by older heroes, some of whom had recently passed away: Florian Schneider, Jon Hassell, and McCoy Tyner along with John Martyn and Sly Stone. These gentle, world-building songs made him consider how the dynamic range of contemporary popular music has been misused, prioritizing volume over depth and detail. “A weird fact of the perception of sound is that you hear more accurately at lower levels of volume,” says Greenspan. Inspired, he thought, “What if I created an immersive environment of what he has named ‘peripheral music’, as it were, by recording huge amounts of material but layering it imperceptibly into as quiet a place as I can?”

To do this, Greenspan made some key moves. He employed American engineer Lou Clark, recommended to him through his longtime Mastering Engineer Bob Weston, to build a studio that prioritized a synth room and a mixing room. For final mixing equipment, he paired a Studer A80 quarter-inch master tape recorder with the Dolby Spectral Recording (SR) noise reduction system. In the studio, he “re-amplified” his synths and keyboards, like the Yamaha DX7, by plugging them into guitar amps and recording them on microphones. All together, Greenspan became convinced that quiet dynamism was the mode of Waiting Game.

The titles and lyrics of Waiting Game orbit around a singular theme: the feeling of waiting around for something, anything, to happen. During his walks through an eerily quiet Hamilton, Greenspan tuned in more closely to other people’s conversations. When he heard a phrase that seemed interesting, he wrote it down verbatim, and when he came across something beautiful or odd, he wrote down a description of it. This patchwork style of lyric-writing feels light and bright, with a sense of freedom.

Lead single “Night Walk” imagines a person who has gone missing, who has no desire to be found. “They are being searched for by day, and can only go out at night,” says Greenspan. “The daytime itself is an invasion of privacy and the night city is a camouflage.” The video was edited by Mike Jerome using footage of the TV show “Night Walk” created by slow television pioneer Michael Spivak. The video footage was shot at night, in and around Yorkdale subway station in Toronto in 1986.

Greenspan concludes, “Waiting Game is intended to give the listener some respite. I like the idea of people putting it on a home and exhaling in relief, even if that relief is tinged with some sadness.” In this, Junior Boys have made an album that reflects the quiet beauty of the world, so long as you’re prepared to truly listen.

by SPILL NEWS on May 29, 2019
WIVES ANNOUNCE DEBUT ALBUM SO REMOVED OUT OCTOBER 4 VIA CITY SLANG BAND SHARES NEW SINGLE “THE 20 TEENS” WIVES today announced their debut album, So Removed, will be released on October 4, 2019 via City Slang. The Queens, NY-based four-piece has [...]
9.0

by Nicholas Musilli on March 29, 2019
White Denim Side Effects City Slang The latest offering from White Denim continues where they left off — exactly right where we wanted them to. Their eighth album, Side Effects, is the continuation of Performance for all of us wanting [...]
3.0

by Nick Hemming on February 8, 2019
Jessica Pratt Quiet Signs City Slang/Mexican Summer For her latest album, Quiet Signs, Jessica Pratt embraces a psychedelic ambiance reminiscent of early Stevie Nicks. This is not the kind of record that will have audiences on their feet, [...]
8.0

by Nicholas Musilli on August 24, 2018
White Denim Performance City Slang Whenever I hear a new song, my brain tries to place the common sounds, tries to pull together references to say, “hey, keep listening, you’ll like this.” White Denim’s Performance is everyone’s brain pulling [...]
9.0