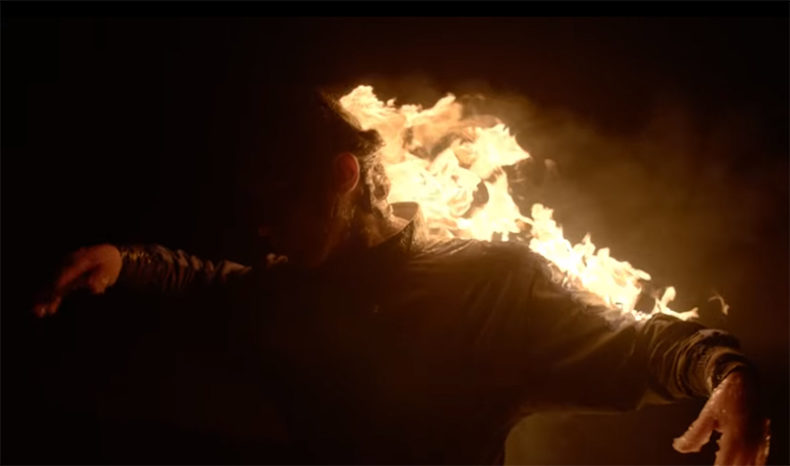 Australia’s King Gizzard & The Lizard Wizard are on fire… literally.

Today, the band released a wildly heavy new single “Self-Immolate ” alongside an insane video which sees the members of the band burnt alive in a Satanic ritual. It follows in the same vein as their previous John Angus Stewart-directed video for “Planet B” that was released in early April. “Self-Immolate” sees riff piled upon riff and Stu Mackenzie delivering a vocal display to stand alongside the likes of Slayer’s Tom Araya or Sepultura’s Max Cavalera.

These new tracks take a distinctly different tack to the band’s recently released album, Fishing For Fishies , which came out on Flightless and ATO Records in late April 2019. That album ended up at #1 on Billboard’s Tastemaker Albums Chart and #2 on the Heatseeker and Vinyl Albums Charts .

“Self-Immolate” proves that King Gizzard & The Lizard Wizard aren’t mere dabbling dilettantes when it comes to thrash and metal. Their love of this ferocious music runs deep, and was previously explored on 2017’s apocalyptic concept album  Murder Of The Universe,  hinted at during 2016’s critically-acclaimed Nonagon Infinity‘s more bludgeoning moments and elsewhere in numerous hardcore psychedelic freak-outs in their back catalogue.

King Gizzard will embark on a massive North American tour in August, including dates in Vancouver, Montreal, and Toronto. Tickets for all dates are now on-sale and all tour dates are below.

The stats on King Gizzard’s colorful career are stacking up fast: 14 albums in 7 years (including five in 2017 alone), 9 of them charting in the Top 20 in Australia, where they are now arguably the country’s most innovative, important and productive rock band. International critical acclaim. Headline festival appearances. And – perhaps most importantly – a fervent worldwide fanbase who share endless memes, mixes, videos, graphics, theories and discussions, all through which they explore and expand what they have termed ‘The Gizzverse’.

King Gizzard & The Lizard Wizard are no longer simply a band, they are an organic cult. Is it vital then that they never repeat themselves, and continually surprise listeners?

SPILL NEWS strives to keep our readers up to date with news and events in the music industry. We keep you informed of the most recent information regarding new releases, tour dates, and information items about your favourite artists.
RELATED ARTICLES
ato recordsfishing for fishiesflightless records