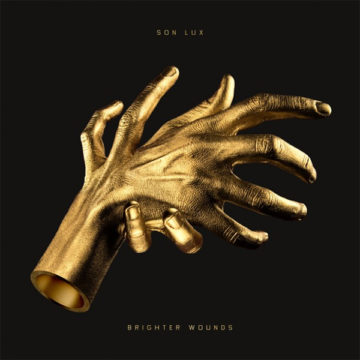 Brighter Wounds is the breakthrough album for Son Lux. Son Lux has been teetering towards the next level for a couple of years. Soundtracks, concerts, guest appearances, and now the long-awaited album Brighter Wounds has been issued. Son Lux is the brainchild of Ryan Lott, who has assembled a band for Brighter Wounds. Son Lux’s last studio album was 2015’s brilliant Bones. Since then, they were featured on the soundtrack of the film Paper Towns (2015), issued a couple of EPs on Joyful Noise, and were sampled by G-Eazy for the song “Eazy” (which featured Son Lux’s “Easy”), which became an internet sensation.

Now in 2018, they have released their fifth studio album (sixth if you count Sisyphus, which was a collaboration with Sufjan Stevens and Serengeti) and as I noted, it has all been leading to this album. Brighter Wounds is a complicated album, not commercial in any sense, but it is accessible, if given a chance. Ryan Lott, who is the founder and creative drive of the band, has put together a personal yet political album that addresses the times and his life the best way he can.

The album opens with “Forty Screams,” a song Lux seems to have written for his son (Lott became a parent for the first time in 2017) in the wake of the 2016 election. “I had wanted another world for you,” he sings. And he sounds both tired and resigned. He knows what is going on, and I think he knows where we are headed and he is not optimistic about the future.

But the album moves along. “Dream State” follows, a love song of sorts, and it sounds incredible. His use of sound and percussion is second to none. The fact that he has written soundtracks and worked with numerous other artists over the last year should not be lost on the listener. He uses this knowledge to create a holistic album. “Dream State” is a perfect example; he moves all around on that song, complete with a false ending to keep you guessing.

Some old friends join the band for support and to help on the album, including Rob Moose, yMusic, and the remarkably talented DM Stith. They all contribute to help Lott achieve his goal of a sonic landscape.

The one issue the album may have is trying to pigeonhole it into one genre. It is one genre: Son Lux, a new genre. There are moments of soul (“Labor”), classical music, choir, dance, electronica, and it sounds like it is all over the map but the album is not; it all makes sense. But be warned, it takes a few spins to really drill down into the record. Like life, it is complicated.

The album ends on a bit of a high note with the closing track, “Resurrection,” a song that once again finds Lott addressing his baby. Perhaps love, family, and a different lens will help. It will not fix the world, or its problems, but there is comfort.

The title Brighter Wounds gives away a lot. This is an album about pain, love and coping. Lott has come a long way since he started issuing records under this name in 2008. He has turned his pseudonym into a band and he has created his first real masterpiece.

Born and raised in Whitby, Aaron discovered music through his love of The Beatles. This led to a career in radio, writing for various publications, and ultimately a radio show about The Beatles (Beatles Universe), which ran for over four years. When not immersed in music, Aaron enjoys spending time with the loves of his life -- his wife Andrea, and daughters Emily and Linda (all of whom have an intense love of music too).
RELATED ARTICLES
album reviewscity slangslowly
9.0