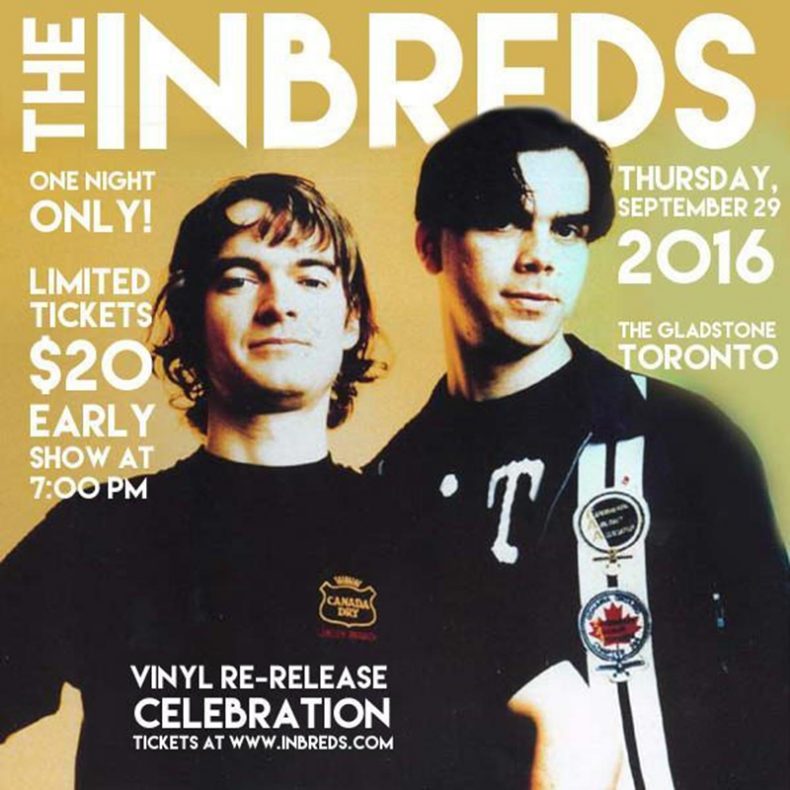 Three of the band’s studio albums, 1994’s Kombinator, 1996’s It’s Sydney Or the Bush and 1998’s Winning Hearts, have recently been mastered specifically for vinyl release at Toronto’s Lacquer Channel. The records, two of which have never been released on LP, will be reissued on 180 gram vinyl with deluxe packaging and new liner notes courtesy of music journalist and radio personality Vish Khanna in a limited edition of 300 copies each.

To mark the occasion, The Inbreds will be reforming for one night only. The duo will take the stage at Toronto’s Gladstone Hotel on Thursday, September 29th for an early evening matinee. Tickets for this show, which will have a 6:30 PM door time and a 7 PM performance, are available now for pre-order here.

More specific details on these vinyl reissues will be released later this summer, including a pre-release bundle purchase option which will be available exclusively through Zunior.com. Formed in Kingston, ON in 1992 by bassist Mike O’Neill and drummer Dave Ulrich, The Inbreds released four albums and numerous split releases and EPs over their six years together.

Out of those four albums, three managed to hit the top spot on the Canadian College Radio album charts and two also received Juno Award nominations for Alternative Album of the Year. Label Obscura is a website and label created with the goal of shining a light on some of our favorite labels, bands, and albums from the past and present. Our label is focused on releasing great Canadian indie rock that never got a vinyl release or is currently out of print. Members of the Inbreds will be available for interviews regarding both the reissues and their upcoming Toronto performance.

You can get your advanced ticket to the event exclusively at Zunior!

SPILL NEWS strives to keep our readers up to date with news and events in the music industry. We keep you informed of the most recent information regarding new releases, tour dates, and information items about your favourite artists.
RELATED ARTICLES
label obscuranewsre-issue
7.0

by SPILL NEW MUSIC on June 21, 2017
THE HEAVY BLINKERS – “FILTERED LIGHT” A Spill Exclusive Music Premiere Today we have the pleasure of presenting you a track from one of Canada’s special east [...]