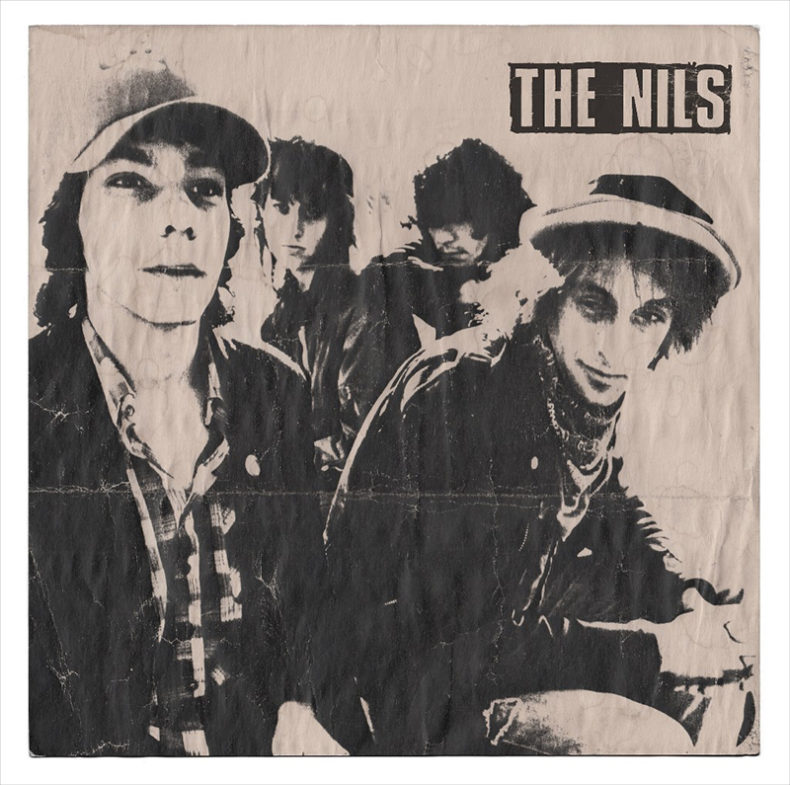 To celebrate the 30th anniversary of The Nils’ influential 1987 debut LP, Label Obscura is proud to reissue a deluxe remastered LP, available on vinyl for the first time in decades on October 14th. This edition of The Nils’ classic debut features new artwork from Yorodeo (the visual art collective of Dog Day’s Seth Smith), a gatefold jacket with archival photos, and liner notes by Jack Rabid, editor of New York’s influential music zine The Big Takeover. A series of live performances from the reformed Nils will follow throughout October.

The Nils’ story has been described as a “Greek rock ‘n’ roll tragedy.” Forging a following in the mid ’80s with their melancholy punk-driven power-pop sound, the Montreal group became casualties of a record label deal gone bad, before spiralling into black holes of drug addiction and death. Despite languishing in legal limbo and quickly going out of print, The Nils’ self-titled LP has become a cult classic, influencing members of Green Day, Hüsker Dü, Sloan, and Superchunk.

Growing up in the Montreal suburb of Saint-Hubert, teenaged brothers Alex and Carlos Soria were inspired by the earliest TV appearances from The Clash and Sex Pistols. Forming the power-pop/punk band The Nils, the siblings recorded a demo, hit the stage with groups such as X and The Ramones, and quickly began touring extensively. “This was the ’80s so there were no cell phones or interweb back then,” says Carlos. “Bands like us built the trenches that kids play in now.” Sadly, the title of The Nils’ 1985 EP Sell Out Young! foreshadowed their troubles to come.

Returning home from what they described as a “lousy Canadian tour,” Alex and Carlos were shocked to receive a phone call from New York’s Profile Records, the label behind the early success of Run-D.M.C. Thanks to Jack Rabid, editor of the tastemaking Big Takeover zine, Profile took an interest in The Nils and offered them a contract with their newly launched sub-label, Rock Hotel. There, The Nils joined punk acts such as D.O.A., Cro Mags, and the rapping Ramone, Dee Dee King. This led to two months of recording sessions at the infamous Chung King studios (where the Beastie Boys went gold with Ill Communication) and Times Square’s Soundworks, while The Nils worked with a pair of musical luminaries.

“Chris Spedding produced The Cramps, John Cale, and the Sex Pistols’ first demo, so we were in complete awe of this guy,” says Carlos. “On top of that, Phil Burnett is the greatest engineer in the world. He worked with Steely Dan, and those albums should be revered in museums, plus he also recorded Bad Brains’ I Against I. Chris wasn’t a technical guy, so it was great to work with Phil because he’s kind of a mad scientist. He almost had a white robe on.”

Released the same year as Guns ‘N’ Roses Appetite For Destruction and The Replacements’ Pleased To Meet Me, The Nils’ debut stands shoulder to shoulder with 1987’s most celebrated rock albums, bridging a gap between power-pop and the paradise city. Critical acclaim arrived in the form of a placement on Rolling Stone’s ‘College Rock’ top 10 list, while The Nils made an even larger impression on their musical peers.

Sadly, the dream crashed down when Profile Records announced its bankruptcy. The Nils were forced to come home immediately, leaving their remaining dates of a coast-to-coast American tour, while remaining locked into a contract with the non-existent Rock Hotel. “It’s like playing for the Montreal Canadiens and trying to get onto another team,” says Carlos with a laugh. Years became decades with no news of a follow-up, and while members formed various side-projects, original member Alex Soria tragically passed away in 2004.

The Nils’ silence would continue until 2015 when Carlos reformed the group for their long-awaited sophomore album Shadows and Ghosts. This crowdfunded released features longtime guitarist Mark Donato alongside guests Evan Dando (Lemonheads) and John Kastner (Asexuals/Doughboys). Carlos sees Shadows And Ghosts as the record his brother never had a chance to make, earning the band a new generation of critical success while described by NOW Magazine as “honest reflections on a life hard-lived.” With The Nils back on stage and their debut album available once again, the band’s river of sadness can finally come home.

The Nils’ self-titled debut LP will be released on October 14th on Label Obscura. It is available for preorder HERE.

SPILL NEWS strives to keep our readers up to date with news and events in the music industry. We keep you informed of the most recent information regarding new releases, tour dates, and information items about your favourite artists.
RELATED ARTICLES
label obscuranews
7.0

by SPILL NEW MUSIC on June 21, 2017
THE HEAVY BLINKERS – “FILTERED LIGHT” A Spill Exclusive Music Premiere Today we have the pleasure of presenting you a track from one of Canada’s special east [...]