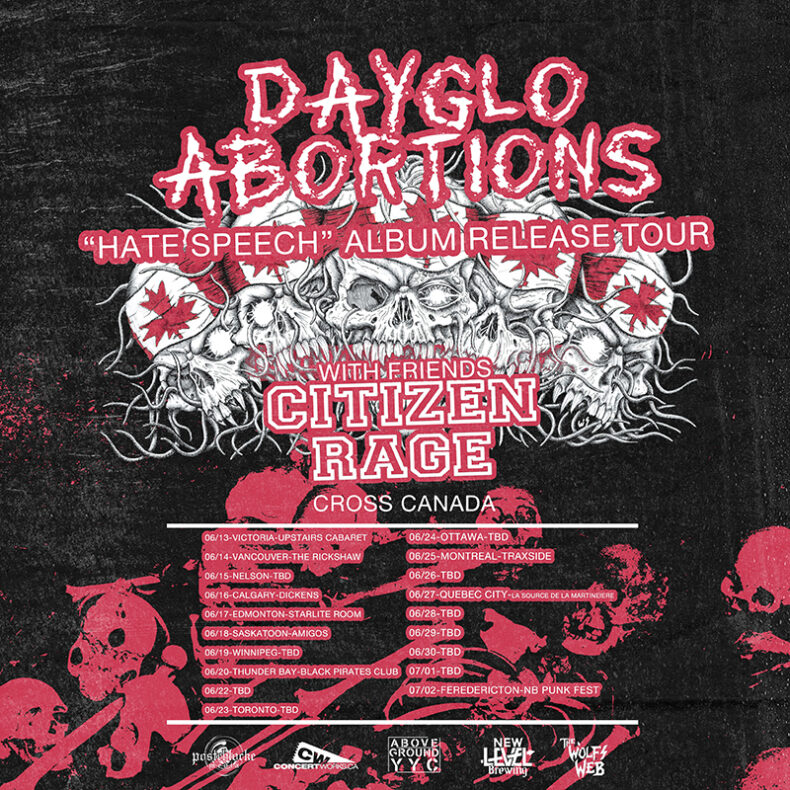 Dayglo Abortions are ripping up Canada this June as they release their newest Album “Hate Speech”. If you’ve been a Dayglo fan for a long time then you won’t be disappointed, this album is chalked full of thrashing guitars, heavy Bass tones and drums that kick you right in the face. Recorded and engineered with Edmonton’s Rob Lawless this album is nothing more than another Canadian classic punk rock masterpiece.

Joining Dayglo is Calgary OG hardcore punks Citizen Rage. Team Cr has been out and about since 2014 shredding with bands like Mad ball, Ignite, Crow-mags, Cancer Bats, Comeback Kid and many more. With a back catalogue of 6 EP’s and a full length on its way this fall, CR is really looking forward to getting out and touring like crazy this June and having some fun with Canadian legends the Dayglo’s.

This album is dedicated to the people that helped us make it. Scott Bennet and Scott Henderson, for essentially talking me into making it, then offering their studio (the lap of luxury) so we could do the pre-production work while in the middle of Covid-19 induced lock-downs. Then Rob lawless, and Terry Paholek, for allowing us to Invade their studio (The physics lab) in Edmonton Alberta, and for the brilliant work the did making it sound so good. Next is Matt Jak and Sherry Benson, and family, for inviting us into their home and putting us up in Edmonton. And finally Tyson Cale Boyd and the people at The Starlight for putting on the show that paid our travel expanses. Well why the fuck stop there, The Edmonton Jak’s for always rocking out with us, and all of you for supporting through the years. Cheers to all of you.

SPILL NEWS strives to keep our readers up to date with news and events in the music industry. We keep you informed of the most recent information regarding new releases, tour dates, and information items about your favourite artists.
RELATED ARTICLES
dayglo abortionshate speechnews

by SPILL NEW MUSIC on January 6, 2022
DAYGLO ABORTIONS – “RAISED ON CHEST MILK” A SPILL EXCLUSIVE MUSIC PREMIERE This album is dedicated to the people that helped us make it. Scott Bennet and Scott Henderson, for essentially talking me into making it, then offering [...]

by Michelle Cooney on April 27, 2021
Murray Acton Covid-19 Nervous Breakdown Independent On the subject of COVID-19, Murray “The Cretin” Acton has a lot to say on his debut solo album. For a guy who has been touring with Canadian punk legends Dayglo Abortions since 1979, it’s easy [...]