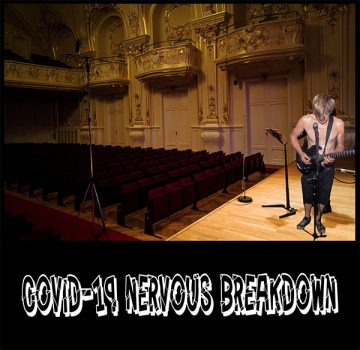 On the subject of COVID-19, Murray “The Cretin” Acton has a lot to say on his debut solo album. For a guy who has been touring with Canadian punk legends Dayglo Abortions since 1979, it’s easy to imagine going a bit stir-crazy during the pandemic. But with times of struggle come great art, and while this might not be the greatest offering, it’s full of humour and heart.

Despite being labeled a self-proclaimed result of boredom, it’s really anything but boring. Acton experiments with an impressive array of genres – from blues to metal to techno to punk. Having recorded all instruments himself, the result is something remarkable… and a little strange.

There are no doubts as to the theme of the album with tracks titled “Wash Your Fucking Hands” or “Stop Touching Your Face”. Add to this the sludgy “Klein Toilettenpapier”, which – you guessed it – is about the toilet paper frenzy of 2020.

Highlights include “A Cold Goodbye”, perhaps the most serious song on the record. “COVID-19 Lockdown Blues” is another high point, as the most standard punk song. Acton even experiments with his own version of the Rolling Stones’ “19th Nervous Breakdown” on the album’s title track. He says he ripped the music off “some English band that’s been around even longer than me. I hope they can get over it.”

Fans of Dayglo may find it entertaining, but if they’re looking for an album of punk songs, they’ll have to wait for their upcoming release.